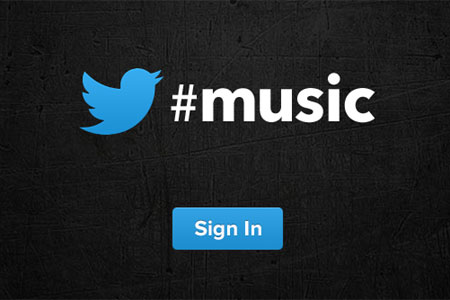 It appears as though Twitter Music, a new song-based service from the website, is in the works, and could be launched as early as this weekend. Those who love their tunes and can’t get enough of the SNS should keep in mind that nothing has been made official yet. As it stands, this should be labeled a rumor.

As The Verge is reporting, talk that the service was in existence started gathering momentum of late, ever since CNET first broke a story that the micro-blogging website had acquired the team behind ‘We Are Hunted’ which provides the ‘hottest new music.’ It seems that the service is scheduled to be launched sometime this week at the Coachella festival, in the wake of a placeholder site having gone live. 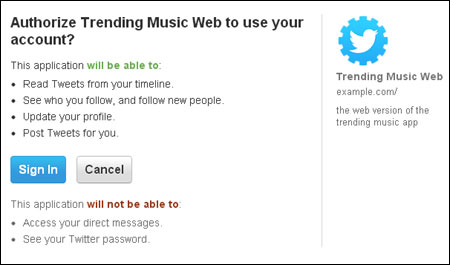 The sign-in button takes users to an authorization screen for an app called ‘Trending Music Web.’ And Stephen Phillips, founder of We Are Hunted, has apparently been tweeting songs from the app for a little while now. His tweets add links to tracks on Rdio and SoundCloud, and there’s even one that links to iTunes. This has led to speculation that these services will be part of the company’s music feature.

It isn’t immediately apparent what Trending Music Web is, and the sign-in button doesn’t do much (yet), but that hasn’t stopped the talk. It is thought that the app could be part of some sort of cross-platform service which aggregates trending music. But it could also be an avenue to share new discoveries.

And to top things off, AllThingsD claims that the app will take into account a variety of personalized information and signals, on the basis of which, it will suggest to users artists and tracks to listen to. The input is thought to include the accounts that a user is following. It is also said that users will be able to listen to clips of songs from within the app, and view music videos provided by Vevo, a service owned by Universal Music and Sony. 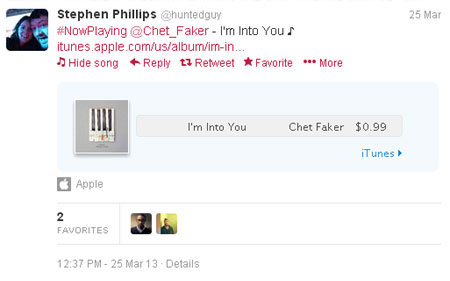 Once again, all the evidence pointing to the impending Twitter Music service doesn’t necessarily mean that such a thing will actually be launched, although it is possible. It’s safe to say though, that we’ll be keeping our eyes peeled for any signs this weekend.