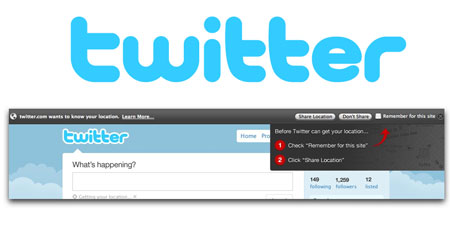 Most ‘tweeple’ on Twitter claim to find it difficult to stop those twitching fingers from tweeting their daily happenings (or secondly happenings should we say?). Well, add to that their whereabouts now! Twitter surely seems to be digging its feet really deep into location based services. Its latest feature lets users’ geotag tweets straight from the microblogging site.

With millions of tweets being posted everyday, there appears to be an outburst of information about anything and everything on Twitter. The move, the official blog shares comes after the surging interest of users in location sharing applications, games and services.

On logging into Twitter, users will see a dialog box that reads ‘Tweet your location’ which when enabled allows the site to discover their location. This is done by the site using Google Gears. Following this, users will observe a tiny pin icon on the information line of their latest tweet. Simply hovering over it pops up a Google Map with the users location.

Twitter does not compel users to add their location to a tweet as users need to activate it. The feature is turned off by default and users can leave out their location information if they wish to. Adding this extra layer of context should further assist Twitter gain a richer information network. Besides, location data can also make tweets more useful in a number of ways.

The feature has been rolled out for a number of users. Whether most Twitter users would be enthused about appending geographic data to some of their tweets though is yet to be seen.