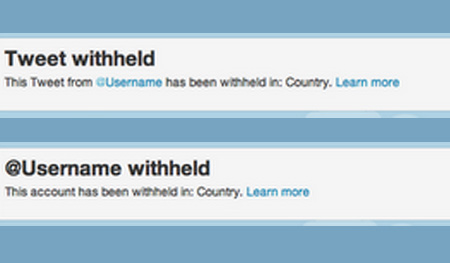 In a move that might evoke mixed reactions from several parts of the web world, Twitter has recently announced that it will start withholding content based on region or nation, to allow more transparency and freedom of expression. We already know that the microblogging site holds the right to censor content whenever required and has been practicing this for almost a year.

Earlier, tweets which were required to be removed due to their offensive or illegal nature were completely concealed from all users on the website. But with recent developments, it will be possible for Twitter to withhold such content in only specific countries, where a particular post may be considered to have an undesirable effect.

“Until now, the only way we could take account of those countries’ limits was to remove content globally. Starting today, we give ourselves the ability to reactively withhold content from users in a specific country — while keeping it available in the rest of the world. We have also built in a way to communicate transparently to users when content is withheld, and why,” said a recent post on the Twitter blog.

Furthermore, the blog post also reveals that whenever it is required to inhibit exposure to a certain tweet or account, the concerned user will be notified. In addition to this, the exact content that is being censored would also be specified. The site further assures audiences that the information will be censored after it is posted and such an action shall be initiated on the basis of a valid and applicable legal request.

For any censored post in a specific nation, other users will be able to view a ‘Tweet withheld’ or ‘@Username withheld’ box along with the country name.