Twitter goes for emoji integration on web version as well

Those frustrated with the never-ending focus of social media sites on their mobile versions have something to smile about even as Twitter has enabled its web version to show emojis now. These symbols can still be added only through mobile devices, but earlier they were not visible to web users.

The web interface of Twitter can now display all major emojis, or emoticons as they’re also referred to. Moreover, some desktop apps are reportedly also able to show them currently. There’s a small hitch though; despite them being visible in a certain tweet, if that tweet is to be embedded onto another website they again turn into the undefined squares which they earlier used to be. 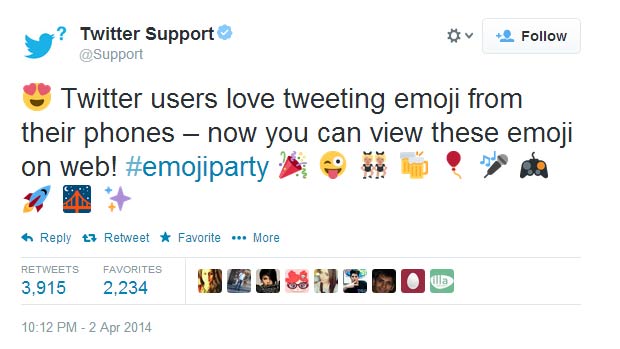 Like we said, it’s only users of the smartphone versions of the Twitter app who were able to see these emojis prior to this. And even right now, they’re the only ones who have the ability to post them in their tweets as there is no way you can insert the emojis through the web interface of Twitter.

It was just a few days back that Twitter introduced a significant new update to its iOS and Android apps. This allowed the utilities to tag other Twitter users in their uploaded photographs. Moreover, it even enabled them to share four images in a single tweet.

Twitter emoji support for the web version of the service is gradually rolling out around the world, so be patient if you’re still seeing squares in your tweets.