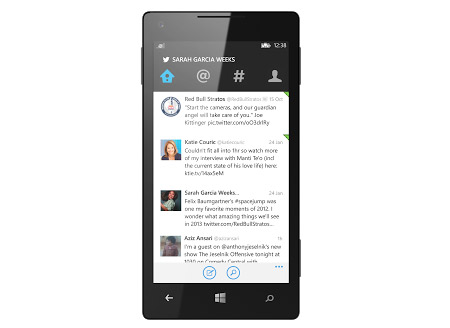 Twitter for Windows Phone just received an update from the folks over at the micro-blogging service. The new features introduced for the software bring it in line with the Android, iOS and BB 10 variants in terms of looks. The update, sized at a mere 2MB, is available for download now through the WP Store; free of cost of course.

The developers of the app have posted on its official blog that the new Twitter for Windows Phone app has been built by them with features that are aimed at making it easier for users to discover and share content that matters to them. While the earlier variant of this tool was more inclined towards the OS’ Metro design in terms of appearance, this one has been crafted differently.

It now houses the Home, Connect, Discover and Me buttons at its top, giving visibility to all of them at a given time. As we know, the Home key allows users to view Tweets from the accounts they follow, while also letting them expand those to see more content like attached photos, videos and website summaries.

On the other hand, the Connect button is meant to let them know about any mentions, retweets or favorites which they receive. Showing of the current trends, browsing through categories, finding friends and viewing suggestions is taken care of by the Discover tab, while the Me button enables users to respond to their direct messages, see their lists, favorites and more. 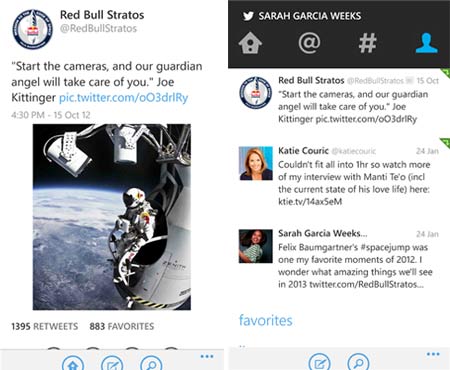 As can be seen in the photographs above, a new Application Bar has been introduced at the bottom of the screen space. Housing two icons, this tool enables users to search new things or type in their Tweets, while anywhere within the app.

Lastly, they will also be able to exploit the live tiles feature of the WP OS. Fresh additions allow users to pin their accounts, lists as well as searches to their start screens for quick access. The new version of Twitter for Windows Phone is now available for download through the company’s store. Dubbed version 2.0.0.1, it has been revealed to be compatible with all versions of Microsoft’s mobile OS.