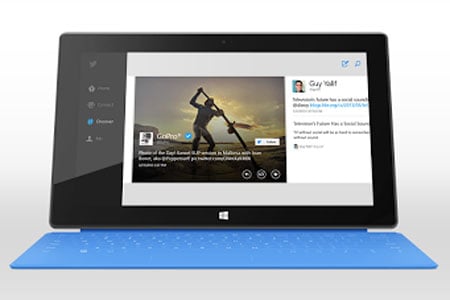 The Twitter for Windows 8 app has been officially released and is now available on Microsoft’s Windows Store. It adds a great deal of other features over and above the familiar functionality that has come to be expected of the micro-blogging platform such as the Home, Connect, Discover, and Me tabs.

The new Twitter app takes advantage of the Windows 8 platform and as a result is capable of giving users a slightly greater level of functionality. Something new is the snap view, with which another app can be used simultaneously alongside the social networking program. 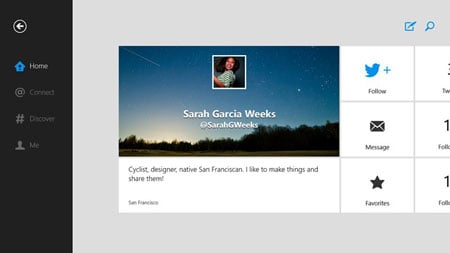 Much like Samsung’s multi-window trait, this feature allows users to multi-task. They can, for example, watch a video and still keep one eye on tweets that keep flowing in. There is also the ability to resize the app, and have it set to one-thirds, two-thirds or full screen.

Photos can be viewed much larger thanks to the new landscape view and users can swipe to see multiple photographs in the Discover tab or while browsing through the members’ profiles. A single tap on an image will open it up in full screen view.

Then there is this thing called the ‘share charm.’ It allows content to be tweeted from any app. Users will have to swipe from the right edge of the screen to have the share charm pop up, from which content such as a photo or a news article can be shared. The video above shows how this works.

And like the share charm is the ‘search charm,’ which makes it easy to find tweets or accounts using certain hashtags. It too can be accessed by swiping from the right edge of the screen when working in any app. 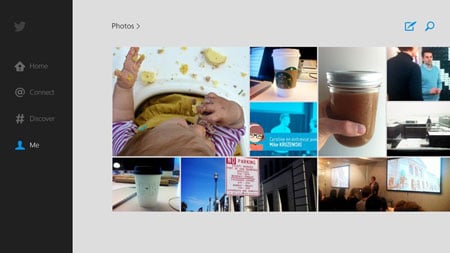 Finally, the last of the new additions include live tiles and notifications. As might be understood, this allows users to stay in the loop at any given time, whichever app is running. As can be seen, most of the inclusions are aimed at seamless and hassle-free multi-tasking, allowing users to do more while still connected.

Twitter for Windows 8 is available in 22 languages including English, Spanish, French, Chinese, Italian, Japanese, Korean and German, among others, and can be downloaded for free from the Windows Store, design lead Mike Kruzeniski writes on the official Twitter blog.