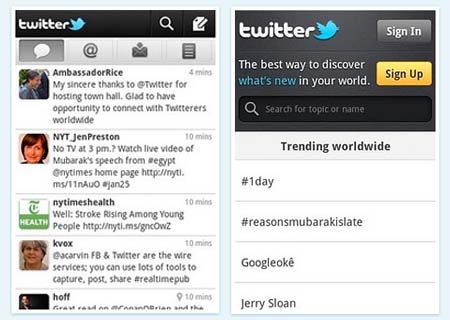 For those who’ve been waiting for Twitter’s Android version to catch up with the iPhone and BlackBerry Twitter apps, the developers are ready with one. The updated Twitter for Android app is sitting quite pretty with a UI refurbishment and universal search option among other new features, according to the official Twitter blog.

There’s no need to be a member or log in before using Twitter from an Android phone anymore. While people can sign up for the service from within the app, trends, suggested users in several categories and more may be viewed by non-members too. Users also get to look up a particular term on tweets, people whose user names have that word or tweets sent by ‘tweeters’ from a nearby location.

The redesigned UI is what stands out among all these changes in the new version of Twitter for Android. The timeline, @mentions, messages and lists now line up along the top of the interface. The @mentions tab even incorporates Retweets and another useful addition is auto-complete for usernames. The updated app additionally includes the ability to scan address books to find friends who have opted to be discoverable.

This Twitter for Android app is downloadable from where else but the Android Market, for Android 2.1 or later versions of the OS.