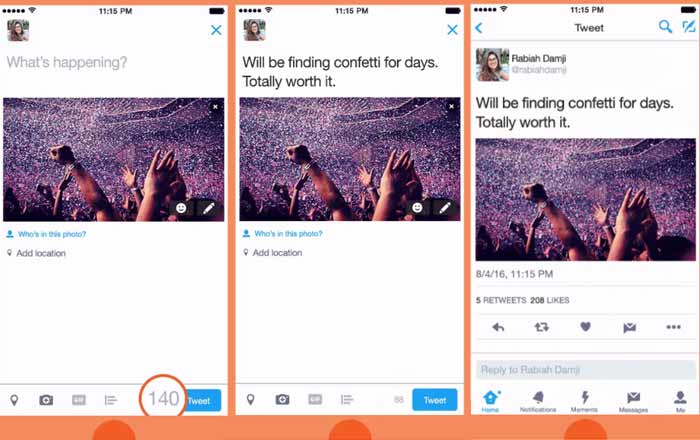 Twitter’s finally gone ahead and done away with its iron-clad rules for the 140-character limit it’s been imposing since its inception. While the boundary is here to stay, the site has chosen to relax the things which add up towards the restriction.

From now onwards, media attachments like GIFs, photos, videos, polls, and Quote Tweets won’t count towards the 140-character limit. However, @names which appear at the beginning of tweet replies are still being taken into account for now. Twitter had previously claimed that this too would be stripped away. It’s possible the platform is still testing out that particular change.

The news should come as a welcome relief to users who’ve been forced to cut down on words in order to adjust to add-ons. Twitter had first announced this major development back in May this year. It’s taken its own sweet time to roll out the tweaks to its consumers. It had apparently even considered breaking free of the 140-character limit entirely.

Also Read: You can now see whether someone has read your Twitter DM

Twitter later decided against the extreme move in order to retain the creativity, brevity and speed demanded by the ceiling. It’s been pretty active trying to appeal to its current user base and attract newer ones to the fold. It recently launched its first livestream by airing an NFL football game.

The endeavor appeared to be a success for the most part, with many praising Twitter’s efficiency in combining tweets with streaming. Over 2.1 million viewers watched the game at the livestream’s peak, while 243000 tuned in to watch the game on average per minute.