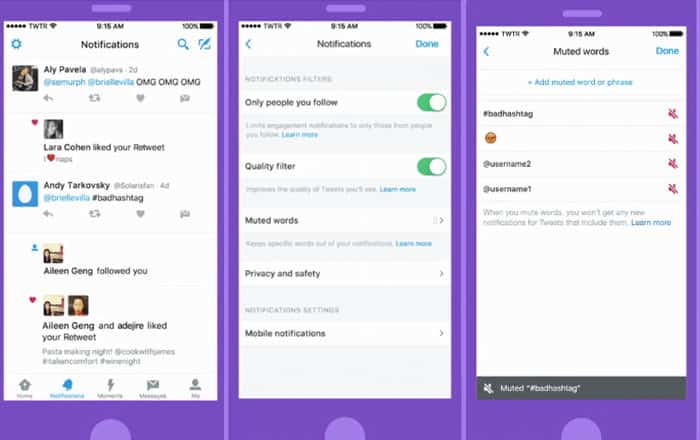 Twitter’s getting serious about tackling abuse on its platform, rolling out a couple of new features to help people combat vicious trolls. It’s the latest step the company has taken to make sure members don’t leave the site in droves.

In a blog post, Twitter’s outlined the 3 areas it’s decided to focus on to improve its track record with abuse. Firstly, the mute tool is getting a major update. The function was previously just restricted to letting users block accounts they didn’t want to see tweets from.

Twitter is now expanding mute’s scope to cover notifications as well. Individuals will be able to silence keywords, hashtags, emoji, phrases, or even entire conversations from popping up in their alerts. The tool is currently rolling out to everyone over the course of the coming days. It’s apparently an in-demand feature which the brand promises to improve over time based on feedback.

Secondly, Twitter’s introducing a more direct way for people to report abuse for themselves or their friends and family. It asserts that this will help it better process these reports and reduce the burden of the person going through attacks as well. It hopes this change will help strengthen a culture of collective support on the micro-blogging site.

Finally, Twitter says it’s looking to be stricter when it comes to enforcement. To do so, the brand apparently retrained its support teams and conducted special sessions on cultural and historical contextualization of hateful conduct. The company’s further implemented refreshed tools and systems to make sure reporting is faster and more transparent.