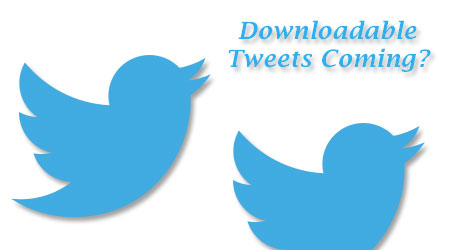 Twitter has started rolling out an option allowing users to download an archive of their tweets. This includes all messages and pieces of information ever tweeted since users got onto the 140 character-limited social networking web site.

It is not for the faint of heart though, and users will be given an otherwise obstructed glimpse into their own tweeting past, which in some cases may lead to embarrassment. The Next Web picked up on several ‘Tweeters’ who indicated that they had the option enabled.

A while ago, CEO of Twitter, Dick Costolo, had mentioned that the company was thinking about delivering to users the aforesaid ability. What was pointed out was that EU policy required that such services allow their users to request such an activity archive. This is most likely intended for individuals to know what personal information Twitter has on them.

Coming back to the matter at hand, once requested, the tweets will reportedly be delivered to users in an HTML file within the archive which is said to display all of users’ micro blogging activity in a layout similar to that of the web site. Also in the archive are CSV and JSON files which contain all the metadata associated with the tweets.

TNW also contacted Twitter to find out if this capability would make its way to all users on the site, and if so, when might users expect it. The official word is that this ability to download tweets is still in an experimental phase with ‘a very small percentage’ of the site’s members being granted the elitist permissions. Users can check whether they’ve got the option enabled by going to the bottom of the settings page.

The micro blogging web site is constantly making changes to refine the social experience. Looking back, in mid-November it updated its iPhone and Android apps, allowing users to view photos and videos in full screen. Around the same time, the company introduced a new sharing feature granting the ability to e-mail a tweet from the site, in order to reach a larger audience, especially those who aren’t on Twitter.