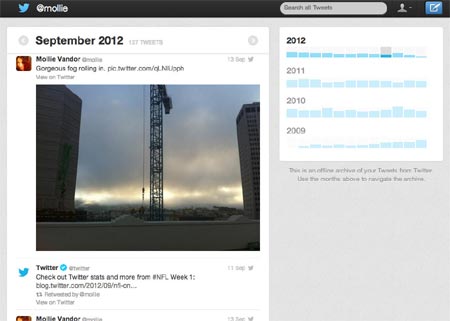 The Twitter archive, something we’ve heard quite a bit about over the past few days, is in the process of being introduced to users of the micro-blogging web site, giving them the ability to download their tweets. This will even include re-tweets and stretches all the way back to the very beginning.

Just last week some users started noticing an addition on their settings page which led to them being able to request all of their tweets ever tweeted. They did so with glee and even received a record of all their history on the social networking web site, even posting images of the familiar interface.

Some time before this ability started popping up, Twitter CEO, Dick Costolo had accepted that the company was thinking about giving the power to users. And why not, it makes looking through old tweets so convenient.

The image we’ve pasted above is a peek into what the interface looks like, with users being given the option to review their tweets by year and month. A post on the official Twitter blog says that micro-bloggers can even rummage through the entire listing by typing in ‘words, phrases, hashtags or @usernames.’ The blog doesn’t emntion what happens to deleted tweets though, and it’s unclear at the moment whether those will show up in the library. 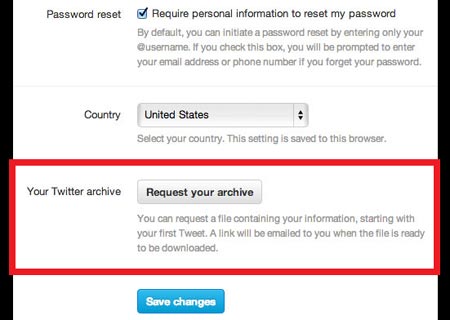 In order to check whether the site has empowered them, users will have to go to the settings page, scroll all the way to the bottom and see if the option allowing them to download their tweets is present. If so, they will be able to request their Twitter archive and will receive an e-mail with detailed instructions on how to receive theirs when it becomes ready for download.

This is useful not only to those who wish to keep a record of their activity, but also to those who would like to rifle through stuff long-tweeted. The latter can now be accomplished with greater speed.

Sadly, the Twitter archive feature is rolling out slowly and to a small percentage of users; in particular, to those who have their language set to English. The rest of the site’s users can expect to see their settings pages updated in the weeks and months to follow, for all languages that the site offers.