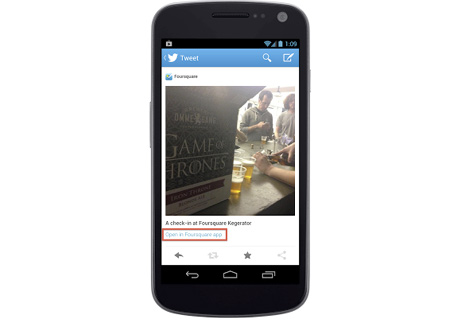 A Twitter update for Android and iPhone has popped up soon after the micro-blogging hub had been subjected to an upgrade last month. The boost will be applicable to its mobile website as well and will bring along with it quite a few augmentations.

The latest edition will now display more content when users view expanded tweets. The posts will show more types of data like apps, photo galleries and product listings. And in case the publisher has shared something from another application like Foursquare or Path, a link for the same will show up at the bottom. Once clicked, it will lead users to either open or download the app. 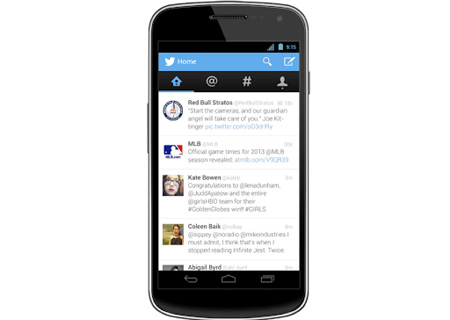 Android customers seem to be the privileged ones, as they will receive a major chunk of the upgrade. They will be exposed to an all new layout that has been specially designed for the platform. It will now flaunt broader and taller timelines so that they fill out the device’s display. Actions can be carried out by simply hitting a button and holding it for a bit. A flat navigation bar has also been introduced into the design, while another addition is that users can jump from one tab to another by just swiping their screens.

Apart from this, the tool will suggest usernames and hashtags when people are typing in their tweets or searching for something, which makes it easier for them to find other on the site and join chats. To round it all off, the developer has also incorporated a few bug fixes into this version. 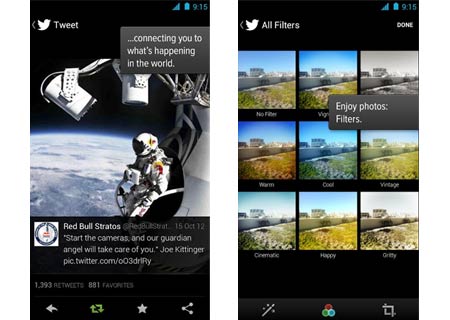 As for iPhone users, the blogging website has infused improvements so that launch times are expedited and the performance of the app is enhanced. Bugs that were brought to notice like the ‘reply-to-self’ option has been taken care of. Moreover, sometimes consumers weren’t able to undo their retweets and the developer has doled out a fix for that as well. The ‘Retweeted by’ button has now been rendered tappable.

Prospective users can head over to the Play store or iTunes if they want to lay their hands on the updated Twitter app for Android and iPhone. It is compatible with Ice Cream Sandwich or higher and iOS 5.0 or up.