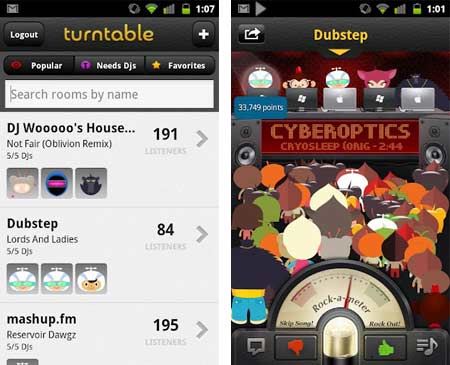 After making its presence felt on iOS and on the web, the turntable.fm for Android app is now ready to tread the Google path. This application is available for Android based smartphones and tablets via the Google Play Store.

The socially inclined software not only allows users to discover new tracks and albums, but also lets them chat with friends and virtual room members from the app itself. As opposed to most other music streaming services or personalized radio applications, the turntable.fm software offers a social listening experience that involves all members of a chat room. Basically, each of the DJs takes turns to play a song for all the subscribers in their room and that results in a completely diverse playlist.

A rather useful feature of this software is the voting option. Users of the app can cast their votes in favor of the track being played or against it, as either awesome or lame. If a number receives a lot of lame votes, it is skipped from the playlist. Another attribute of this application which adds to its functionality is the fact that it lets members tag DJs as favorites for instant access to their music.

The Verge, who spotted turntable.fm at the Play Store reports that there are certain faults in the app’s chat feature. But an update or two in the future should take care of that. It is compatible with Android mobile devices running the 2.2 platform or higher.

The turntable.fm for Android app is available for download through the Google Play Store, free of charge.