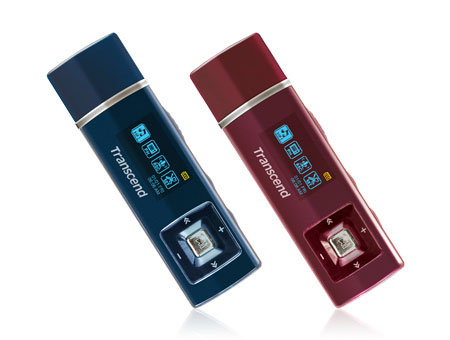 Earlier this week we had reported that Transcend had released the T.sonic 850 MP3 player. It looked like any other MP3 player that is available in the market these days. Now the folks over at Transcend have racked their brains and gotten inspired by those players that are a combination of a USB drive and a media player.

The result seems great! Transcend has introduced the T.sonic 320 MP3 player, which has a built-in USB connector. This means that the owner can use it like a USB drive to not only transfer songs but also documents, pictures and other files from any computer with a USB port. One big advantage of this is that there is no need of those pesky cables that keep on snaking around the computer.

The T.sonic 320 MP3 player supports formats such as MP3 (of course), WAV, WMA and even WMA-DRM10 (subscription music). Users can expect recordable FM Radio with twenty station presets and an advanced digital voice recorder that has voice activity detection. The player features a vibrant dual-color OLED screen that displays clear text at any angle and in any light. And yes, it has karaoke-style synchronized lyrics display. It also offers variable track playback speeds and A-B repeat.

The T.sonic 320 displays thirteen languages including song title, artist, and synchronized lyrics. It comes with a software that allows users to password-protect their files. The player has seven equalizer effects like normal, pop, rock, classical, jazz, bass and even user EQ. It has a real time clock that displays local time as well as world times. The MP3 player is powered by an internal Li-ion battery that gives over 15 hours playback, but that can only be achieved with the screen saver set to blank and lyrics sync disabled.