The Truecaller application which is popular on various mobile platforms has been given an update for iOS devices. The latest version is said to be ‘faster than ever’ and it features various new capabilities as well as a fresh interface.

According to the company, the updated Truecaller application introduces an entirely new design. The interface looks clean and blends really well with the latest version of iOS. Also, the facelift has also been optimized to look good on the iPhone 6’s and 6 Plus’ large displays. A new ‘Today Widget’ has been introduced with the latest version which is basically designed for iOS 8. 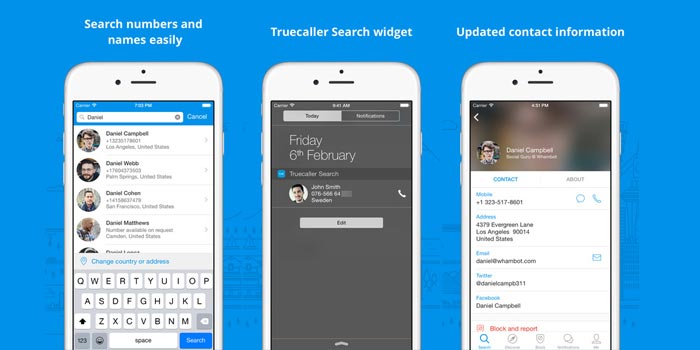 This capability allows you to simply copy any number from your call records and pull down the notification menu to get a quick look at caller’s information. This means that you won’t have to run the app each time you need to identify an unknown number.

Along with the aforementioned new additions, there are a few improvements to existing features. Firstly, Truecaller has enhanced the way you search from its directory of 1.6 billion users. The highly appreciated spam filter which keeps unwanted callers away has also been update for better protection.

Apart from the global directory service, the developer behind Truecaller has also released its own dialer application which is currently available on Android and Windows Phone. It’s highly unlike that this service will land on iOS considering that it’s being touted as a replacement to the default dialer which is something we don’t really see Apple permitting,

The updated Truecaller application for iOS devices is already available for download through the App Store for free. The latest version is only compatible with phones and tablets running iOS 7 and above.