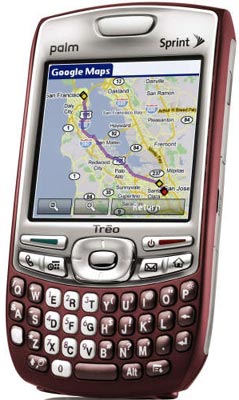 Palm Inc. has introduced a new Palm OS Treo for Sprint- the Treo 755p CDMA smart device. This device happens to be the first ever to offer built-in Microsoft Direct Push Technology email support andGoogle Maps for mobiles. Not only that, the Treo 755p Smart device features the latest Treo design with an integrated antenna, slimmer form factor and mini-SD slot.

According to Danny Bowman, vice president of customer equipment for Sprint, “The Treo 755p is a stylish and powerful device ideal for business professionals looking for the power to do more while on the go. Building upon the success of the Treo 7oop, we’ve added enhancements such as Mobile Voice Control, a new IM application and Sprint TV in the ROM for mobile entertainment and news.”

Listed below are the features of the Treo 755p Smart Device: