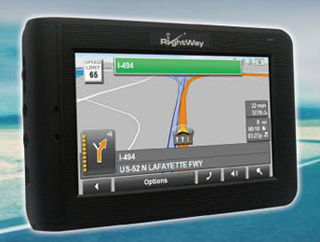 The Transplant Rightway RW430 is the flagship model, which features a 4.3″ TFT LCD anti-glare display. It is preloaded maps of Canada and the United States (including Alaska, Hawaii and Puerto Rico) and over 1.7 million points of interest (POIs). The RW 430 not only announces the name of the street to turn on but also shows which lane to be in so users won’t miss the turn. Besides, included RightSpeed Assistant keeps track of local speed limits and alerts users to user-programmable speed monitoring. Moreover it boasts MP3 player, e-book reader and photo viewer.

The Transplant Rightway RW355 is equipped with all the features that the RW430 has including MP3 player, e-book reader and photo viewing capabilities. However, its screen size is smaller in size, measuring 3.5-inch. On the other hand, the RightWay RW250 incorporates a 3.5″ TFT/LCD screen and street name text-to-speech capabilities.

The Transplant RightWay RW430, RW355 and RW250 GPS systems are scheduled to launch by Q3 2008. The pricing details have not been announced as of now.