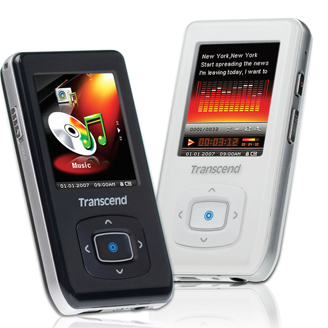 Transcend has announced the introduction of the T.sonic 850 MP3 player, which extends the company’s popular line of MP3 players. The T.sonic 850 is a sleek and light-weight one, perfect for music enthusiasts who cannot do without music on-the-go. It is available with storage capacities of up to 8GB.

It supports most audio/video formats including JPG, BMP, MTV, MP3, WMA, DRM10 and WAV. The T.sonic 850 is equipped with 7 equalizer effects such as the customizable USER EQ mode that allows users to create their own music style.

The T.sonic 850 MP3 player presents a host of good features to the music-loving bunch of people. Some of its other functions include a digital voice recorder, a recordable FM radio with 20 station presets, and a time-zone adjustable world clock.

Further, the MP3 player supports 13 languages, not only in the user interface, but also in the included e-book text file viewer and during synchronized song lyrics display. With the help of its adjustable playback speed and A-B repeat functions, the T.sonic 850 can assist users in learning foreign languages, review voice memos, meetings and class lectures.

The T.sonic 850 also includes T.sonic Utility – use T.sonic to lock your computer and password-protect files.

Transcend’s T.sonic 850 MP3 player is available in 4GB (Ivory) and 8GB (Onyx Black) in India. It comes with a protective silicon cover. The 4GB versions costs Rs.4900, while the 8GB one costs Rs.6250. Both come with a 2-year warranty.