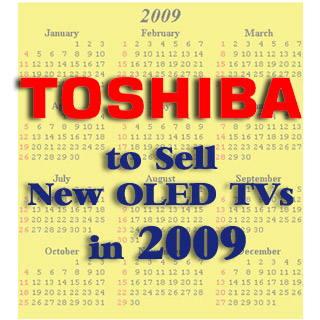 The evolving technology has redefined the look, the feel and the entire TV-viewing experience. The journey from CRTs to LCD TVs to Plasma TVs has indeed been a worthwhile one and now its OLED TVs.

After Sony announced the coming in of XEL-1, the first ever OLED television; electronics giant Toshiba is going the same way. The latest buzz is that the Tokyo, Japan-based company also in the works of selling televisions with OLED (organic light-emitting diodes) screens once the panels are ready, stated a Toshiba spokeswoman.

Slated for a 2009 launch, Toshiba’s first OLED TV will feature a 30-inch screen. The incorporation of OLED technology in TVs, will result in thinner screens and higher contrast ratios along with faster response times. OLED technology requires no backlighting, enabling much thinner cabinet sizes.

While not many details of the Toshiba OLED TV are available right away. We thought of leaving with a little about Sony’s XEL-1 television, which incorporates an 11-inch screen and an estimated lifespan of around 30,000 hours. According to Sony, this is equivalent to eight hours of television per day for 10 years.