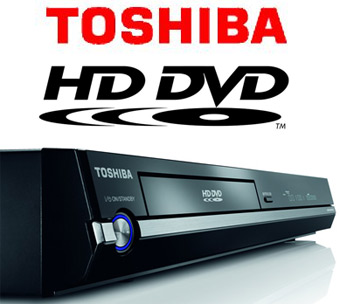 Yesterday, Toshiba unveiled three new sleek and stylish “third generation” HD DVD players in the US market. All three models are priced under $500 and have been designed to keep up with the high growth in demand for High Definition TVs.

As compared to Toshiba’s first and second generation HD DVD players, the new third generation line includes various enhancements. Some of the enhancements include an improvement in video performance with 1080p/24 frames per second (24p) support.

Yet another improvement in Toshiba’s third generation HD DVD player line includes “CE-Link” (HDMI-CEC) connectivity which offers the capability to communicate with and control another CE device. For example, using “CE-Link” with “One Touch Play”, users will be able to start playing a movie with just a single touch of a button on the player’s remote.

The entry level Toshiba HD-A3 player features 1080i output capability, while the HD-A30 and the HD-A35 players have an output of 1080p resolution (1920x1080p), which happens to be the highest HD signal currently available.

Plus, both the Toshiba HD-A30 and HD-A35 models are capable of outputting signals at 1080p/24 frames per second, allowing users to enjoy movies in their native frame rate. These players also feature “CE-Link”, allowing for a two-way control between the HD DVD player and the TV via an HDMI connection.

What’s more; the HD-A35 player offers 5.1 channel analog output and High Bit Rate Audio (up to 7.1 channel) once again via HDMI. With content encoded in 7.1ch, this advanced surround sound is achieved through the HDMI connection bypassing the player’s internal audio processor and sending the signal to a 7.1 capable A/V receiver. High Bit Rate Audio will allow the consumer to integrate the HD-A35 with the latest multi-channel A/V receivers and enjoy a whole new dimension of high definition home entertainment.

Coming to the design of Toshiba’s third generation line of HD DVD players; they all feature rounded edges, slim chassis at justy 59.5mm, making them nearly half as tall as Toshiba’s first generation players.. The A3, A30 and A35 HD DVD players also sport high gloss, black acrylic face plates that lend a very sleek look to the players.

Yoshi Uchiyama, Group Vice President, Toshiba’s Digital A/V Group said, “”Consumers will always have a consistent experience with HD DVD as we have an established platform to keep the players updated to ensure the ultimate HD movie experience.”

“A mandatory Ethernet port in all HD DVD players ensures that consumers can receive updates to their units to support the latest offerings from the studios and maximizing their investment in the format,” he added.

Plus, all of Toshiba’s HD DVD models are backward compatible allowing users to enjoy their libraries of current DVD and CD software while enhancing the look of regular DVDs by up converting them to near High Definition quality.