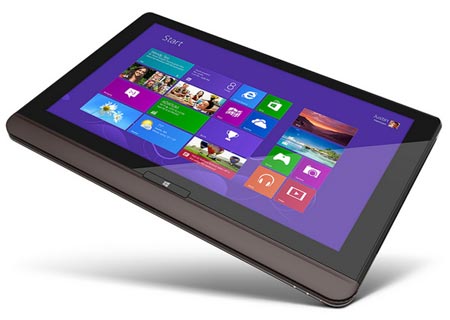 With Windows 8 arriving this October, the Toshiba Satellite U925t Ultrabook, Satellite P845t laptop and LX835 AIO have been optimized to deliver the most out of the new ‘Metro’ interface, or should we not call it that anymore? These devices arrive with touch-enabled displays and will go up for grabs this following month.

The new Ultrabook takes on a convertible form factor proffering various aspects of a tablet. Switching between designs is simple. All users have to do is slide the display up to reveal an LED backlit keyboard and Synaptics ClickPad for a laptop-like appearance. Weighing 3.2 pounds and measuring 0.8 inches in thickness, it comes with a 12.5-inch IPS HD screen that sports a protective coating of Corning Gorilla Glass.

The insides comprise of a 128GB SSD and a third generation Core i5 processor. The front features an HD webcam, while a 3MP AF snapper dominates the rear for use in tablet mode. Other attributes include Wi-Fi 802.11 b/g/n, Bluetooth 4.0, Intel Wireless Display, USB 3.0, HDMI, GPS and NFC.

“These PCs showcase the possibilities of what Windows 8 can do, providing a responsive touch experience on beautiful, precisely engineered hardware,” expressed Carl Pinto, vice president of marketing, Toshiba America Information Systems, Inc., Digital Products Division. “Consumers will love interacting with Windows on these devices with the operating system’s modern, intuitive touch gestures and Windows apps and live tiles. This is just the beginning of a new generation of hardware development designed to take advantage of touch from Toshiba.”

The P845t laptop is amongst the company’s premium offerings that’s bundled with a 14-inch HD touchscreen and edge-to-edge glass. Dressed in a stylish textured aluminum form factor, the notebook is fitted with up to 6GB of DDR3 RAM and a 750GB hard drive. On the entertainment front, users will have harman/kardon stereo speakers with SRS Premium Sound 3D sound and the Toshiba Sleep & Music attribute. 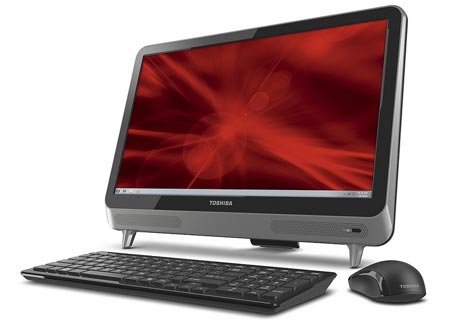 Last on the announcements list is the LX835 AIO desktop that’s incorporated with a 23-inch full HD display on the outside, while components such as 2TB of storage, maximum 8GB of system memory and 2GB of DDR3 graphics through the GeForce GT 630M, are situated on the inside. Both aforementioned rigs are powered by latest processors from Intel.

The Toshiba Satellite U925t, Satellite P845t and LX835 price details haven’t been announced as yet. However, their release date is pinned down for October 26, 2012, through retailers and the ToshibaDirect.com website.