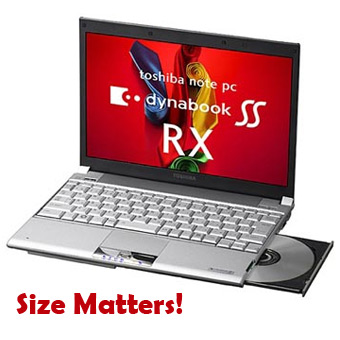 Toshiba has come up with a new model of the Dynabook SS RX notebook, which includes a 128GB solid-state drive (SSD). This humongous sized SSD capacity, touted to be the largest one available till date, is twice the size of the SSD that its rivals – MacBook Air and Lenovo X300 offer.

While Toshiba notebook’s standard is an 80GB SSD, 128GB is a huger option that anyone can go in for. In addition, the Dynabook SS RX notebook incorporates a 1.2-gigahertz Core 2 Duo U7600 processor and 2GB of RAM. It has a 1.2 GHz Core 2 Duo, Intel graphics and a 12.1-inch 1280 x 800 pixel screen, along with a claimed battery life of 12.5 hours, which seems more than enough. It also carries an option for CDMA-powered mobile broadband.

Some of the key advantages of using SSDs are a longer battery life, faster boot times, lesser weight making it possible for notebook makers to slim down their laptops. Also, the absence of moving parts makes SSDs stronger.

But, in comparison to conventional hard drives, SSDs are much steeper and also wear out quicker than normal drives.

It isn’t least bit surprising that initially the Toshiba Dynabook SS RX notebook will only be introduced in Japan in April and will carry a price tag of around $4,000. Let’s hope it hits international markets soon.