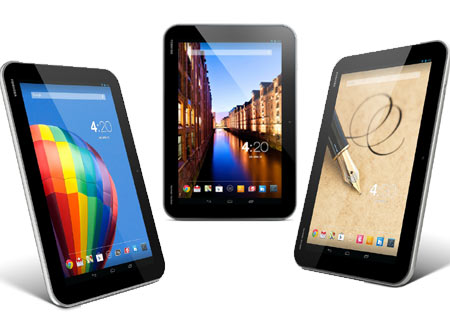 Toshiba has introduced a trio of new Android tablets, the Excite Pro, Write and Pure in the US, and the company has disclosed that all 3 slabs are powered by Nvidia Tegra processors as well as Android 4.2 Jelly Bean with attractive price tags.

The Toshiba Excite Pure is aimed towards the budget-minded who are looking for performance without the need of spending much. Like the Nexus 7, this slate packs in a quad core Tegra 3 processor from Nvidia. The touchscreen on the front is based on a 10.1-inch AutoBrite panel that proffers a resolution of 1280 x 800 pixels. Where memory is concerned, there’s 16GB of internal memory, a microSD card slot and 1GB of DDR3 RAM. Other features include a 3MP rear camera, DTS Premium Voice Pro powered stereo speakers, a microHDMI port and a microUSB slot. 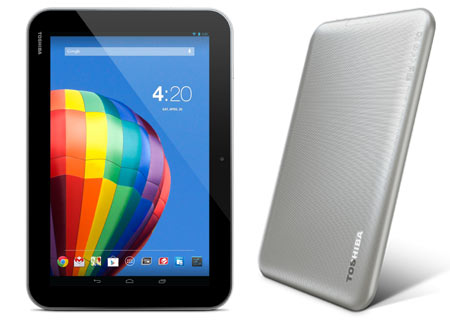 The Pro and Write models also flaunt a 10.1-inch display. However, the panels employed here are PixelPure screens which proffer a resolution of 2560 x 1600 pixels, putting them in direct competition against the new Transformer Pad Infinity from Asus. Additionally, the second device is fitted with a Corning Gorilla Glass 2 protective layer and support for a digitizer pen. Accompanying it are pressure sensitive TruPen and TruNote applications.

Both tablets in question are deployed with Harman Kardon stereo speakers backed by DTS Premium Voice Pro. They pack in the latest Tegra 4 processor and 2GB of RAM along with 32GB of internal hoarding capacity. On the rear, users will find an 8MP f2.2 camera with attributes like HDR, panorama and image stabilization. 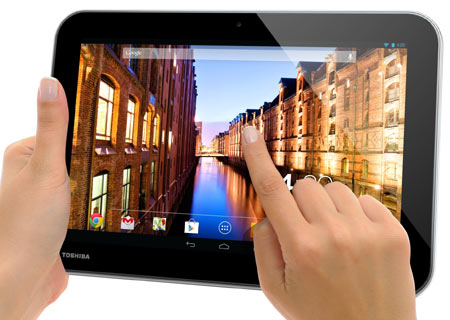 Other components built into the devices comprise of microHDMI, microUSB and microSD slots. For enhanced productivity, the company is offering an optional accessory that acts as a protective cover and a keyboard. It is said to be compatible with the latest lineup and connects to them via Bluetooth.

The Toshiba Excite Pure is expected to go on sale for $299.99 and above, while the Pro and Write tablets will have starting price tags of $499.99 and $599.99, respectively. The latest slates will be available through the company’s online store on June 25, while their release date through e-tailers nationwide will fall during early July. 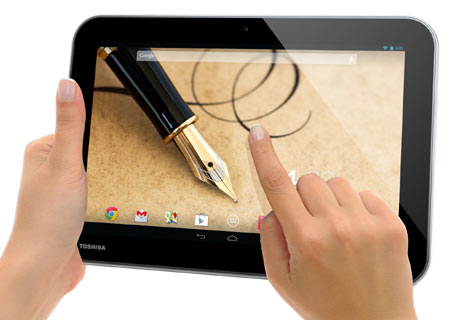