Toshiba has announced an 8-inch Windows tablet, the Encore, which runs on the upcoming version of desktop OS. Slates in this particular segment haven’t been amongst the best sellers over the year and the demand for them is seemingly diminishing over time. But what sets this one apart is that it’s developed in ‘close collaboration’ with the Redmond giant to deliver wide support for applications and other experiences.

The Toshiba Encore is Skype optimized. This basically means you can make high-quality video calls owing to the inclusion of dual microphones and a 2MP front camera. The slate is said to be completely compatible with Windows 7 and 8 applications as well as various services such as Xbox Movies, Music and Games. The device also acts as a second screen for the Xbox 360 and One consoles via the SmartGlass app, and it features a full version of Office Home & Student 2013. 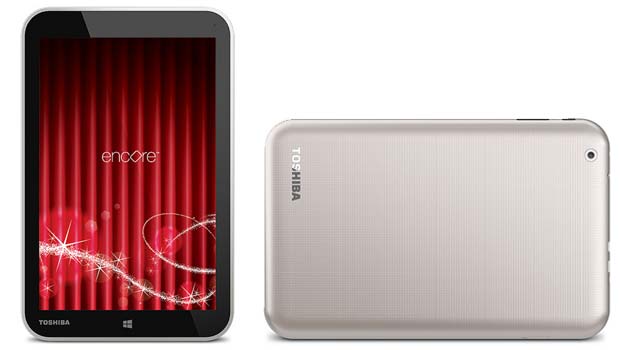 Design-wise, the tablet is highly portable at 479 grams and it’s quite slim as well, measuring 10.68mm. The rear panel sports an 8MP camera which is surrounded by a silver textured finish, while the front dons an 8-inch 1280 x 800p multi-touch HFFS screen. On the inside, there’s a latest generation Intel Atom processor, dual band Wi-Fi 802.11 a/b/g/n and 32GB of storage amongst others. The company has also made provisions of a microUSB 2.0 port, a microHDMI socket and a microSD card slot.

If you’re looking to pick up the Encore, Toshiba plans on putting it up for sale this November through its online store and major retailers for $329.99.