It seems like Toshiba isn’t done with new Windows device launches yet seeing as its two new Encore 2 Write tablets have been spotted online. The duo didn’t make an appearance at the IFA 2014 expo earlier this month like the Encore Mini and a 2-in-1 notebook, but they have been listed as part of the lineup.

Notebook Italia spotted the Toshiba Encore 2 Write on the Device Fact Sheet document on Intel’s website, which highlights the new tablets at the IFA 2014 with company’s processors onboard. What’s interesting is that all of the slates mentioned on the sheet have been revealed officially, but not the series in question. 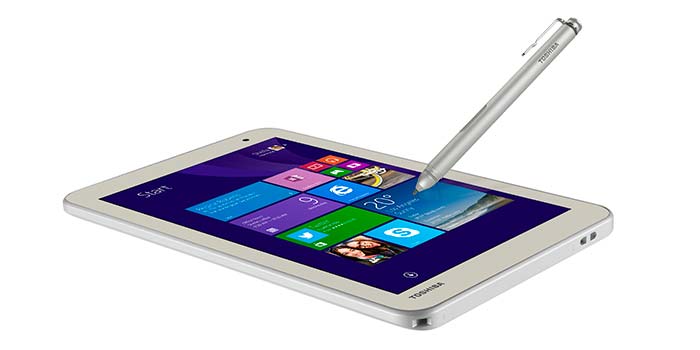 This may be because Toshiba plans to launch the slates at a different venue or has discontinued them. What we know about the lineup is that there will be two tablets, one 8-inch and the other 10.1-inch. Both models will be equipped with styluses, allowing users take notes, create sketches and edit images with precision.

On the hardware front, both devices pack the quad core Intel Atom Z3735 processor. There will be dual camera’s onboard, 1.2MP front-facing and 8MP rear. Sadly, no information on the memory has been provided. Our best guess is that the devices will offer 2GB RAM with 32GB or 64GB internal storage and a microSD card slot.

Also see: Toshiba’s $120 Encore Mini is the first of many affordable Windows 8.1 tablets

These could vary depending on the final price which is still MIA. The Encore 2 Write will obviously be affordable, but not as much as the other Bay Trail slates thanks to the included stylus pen. Lastly, Lenovo has preloaded the TruCapture tool which allows you to take images of documents and whiteboard, and convert them into digital copies.

That’s all there is to share on the Toshiba Encore 2 Write. Well have more information up when available.