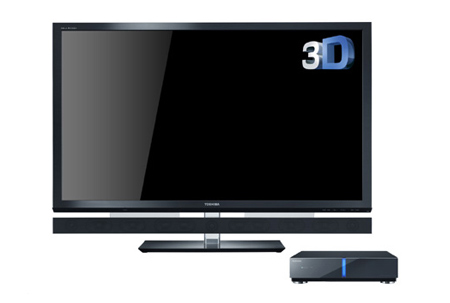 The world’s digital attire is being adorned with superior technological innovations, further raising its style quotient. As Japan prepares to close its analogue broadcasting chapter in 2011, TV manufacturers have been focusing on the development of digital TVs infused with advanced technologies such as HD and 3D. To offer enhanced TV viewing experience to its audiences in the near future, Toshiba has revealed a series of Cell Regza LCD TVs. This series envelops three new models namely, the Cell Regza 55X2, the 55XE2 and the 46XE2 which are embedded with 3D capabilities.

Developed on the refined Cell platform, the new lineup of LCD TVs from Toshiba incorporates the Cell Broadband Engine and are claimed to deliver comprehensive multimedia processing. The key features of the series include its ability to upgrade 3D video content to display enhanced near HD content. Embedded with 3D Super Resolution technology, the side-by-side system splits each frame into two, rendering 960-pixel image to each eye of the viewer. Capturing minute details of images and other visual content, these systems are said to reproduce clear and crisp images and reconstruct moments with greater realism.

The 2D3D conversion technology implanted in the LCD TVs enables to convert image composition and videos from the two dimensional format into high quality 3D. Augmenting the viewing experience further, these screens are crafted to interface with Regza’s high luminance LED. Offering highest luminance of 1,000cd/ m2, these panels manifest striking white brightness while also delivering a contrast ratio of 9,000,000:1 which enables to exhibit detailed blacks. The display is divided into 512 areas by the LED block array function to administer image contrast and flaunt the details of images.

The range has been devised to provide AutoView function for 3D. The company states that to enable users to view excellent 3D content through 3D glasses, the Cell platform has been integrated with the 256 point 16 bit output gamma table and the entire 3D color management technology. This produces superior quality color and by simply fine-tuning the backlight and white balance, optimum picture quality can be obtained.

To extend advanced acoustics, the LCD panels come with HD distortion removal technology which purges disturbances created by HD images that are based on 8 x 8 blocks of pixels. The problems faced due to video blurs can be controlled by the ‘Quattro High Speed Clear’ frame complementary technology. It helps the system to reproduce clean images in vivid colors while the ‘Quattro Motion Clear’ technology ensures smooth display of video images. This technology slots three frames of single images to create the original frame rate of 60Hz. Quadrupling the effect of ClearScan 240, the company claims to enhance images and delivering crisp action scenes on the screen.

The LCD panels from this series are equipped with 3TB of storage capacity. Of the total space, 2TB HDD has been devoted to ‘time-shift machine 2’ which is said to simultaneously record shows and videos from up to 8 channels. The remaining 1TB HDD has been capacitated to store standard recordings of selected programs. The content which is recorded by employing the time-shift option can be viewed even as it is being stored by selecting the ‘Jump to the start’ function.

Users can connect an HDMI cable with LAN cable to document programs directly from a Blu-ray Disc recorder. The 1TB HDD can be utilized for such purposes. The other features which support its multiple recording and playback functions include roaming navigation, recommendation service, simultaneous recording of two shows in stardard mode, instantaneous connection of up to 8 USB hard disk drives and more.

Toshiba has incorporated environmental concerns in designing this range. The LCD TVs meet the standards specified by RoHS and J-Moss (Green Mark). By managing optimum image brightness, these devices control power consumption and if the system continues to operate without any command from the remote for approximately 3 hours it will automatically switch to stand-by mode.