Toshiba comes up with world’s fastest microSD cards, small cameras to benefit the most

The inventor of flash memory, Toshiba has just showcased its vision for the future of microSD cards by terming its newest units the world’s fastest. Adhering to the UHS-II standard which is currently achieved by SDHC and SDXC cards, these new mini storage devices provide up to eight times faster performance than others in the league.

Created in the form of 32GB and 64GB options, these microSD cards are right now being sampled to chipset vendors and makers of smartphones and tablets, but they’re not commercially available to buy. And even if they are, they’ll be of no use to those devices that don’t comply to the UHS-II standard. 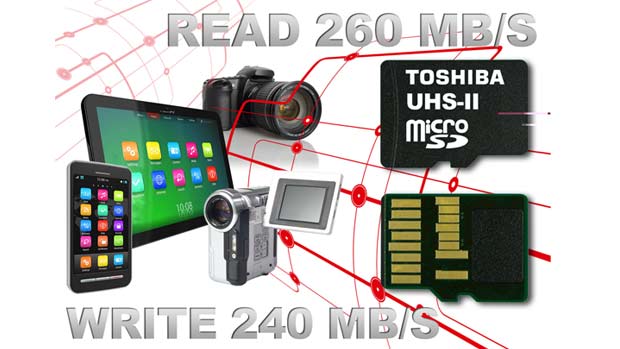 Toshiba has revealed through a press release that the 64GB version of its new microSD card offers a read speed of up to 260MB/s and a maximum write speed of 240MB/s. On the other hand, its 32GB variant is capable to reading at 145MB/s and writing at 130MB/s.

Where exactly will these products be beneficial you ask? Take cameras using microSD storage for instance. Due to their slow nature, they are not able to capture high-res digital shots in a continuous high speed shooting mode. This means smartphones too will be seen shooting high-speed shots once they’re equipped with these memory cards.

Toshiba has not mentioned anything about its roadmap towards pushing manufacturers to incorporate support for these new microSD cards, but seeing their impressive abilities, we won’t be surprised to see them in products in the near future.