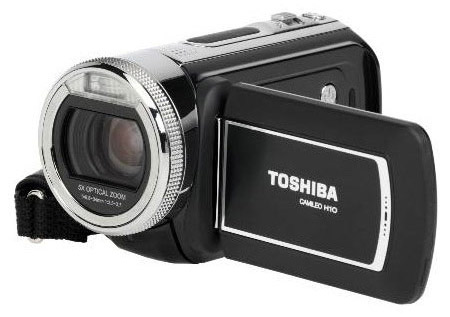 Toshiba has announced its new Camileo H10 camcorder. The latest camcorder features a 5x optical zoom and 4x digital zoom. Further it is capable of recording HD resolutions video in the MPEG4 format.

The Camileo H10 possesses internal memory of 64MB and also supports SDHC cards up to 8GB. With 8GB storage, the camcorder can record video footage for up to 4 hours approximately.

Moreover, for the ease of watching the videos the camera also employs a HDMI output. Hence users can directly connect the camcorder to the TV and enjoy the videos on the bigger screen.

Not only videos, but the new Toshiba Camileo H10 camcorder can also capture still images with the help of the 10MP resolution. A 2.7-inch TFT display is also integrated with the camcorder, which enables users to have a glance at captured images or recorded videos quickly.

The 340g camcorder is easy to carry and user-friendly too. It includes several features that simplifies recording such as a night mode, special effects, negative mode, and black and white mode. While the motion detect setting turns the camera on when it detects motion.

Toshiba Camileo H10 camcorder will soon be available in the market at the price of £179.99. ArcSoft software is also bundled with the camcorder, which will help users to edit their footage.