Toshiba is joining the Windows 8.1 race in India with its WT-8 tablet that’s aggressively priced and offers a good deal of features. The slate is tagged at Rs 15490, which is cheaper compared to most other Microsoft-powered releases in the country and it’s already available for purchase.

The Toshiba WT-8 is basically part of the company’s Encore 2 series. The tablet falls in the 8-inch category and is powered by an Intel processor. The chip used here is the Atom Z3735G clocked at 1.83GHz and the display is a WXGA LED-backlit panel with 16:10 aspect ratio. The exteriors also have a 1.2MP fixed-focus camera on the front and a 5MP snapper on the rear. 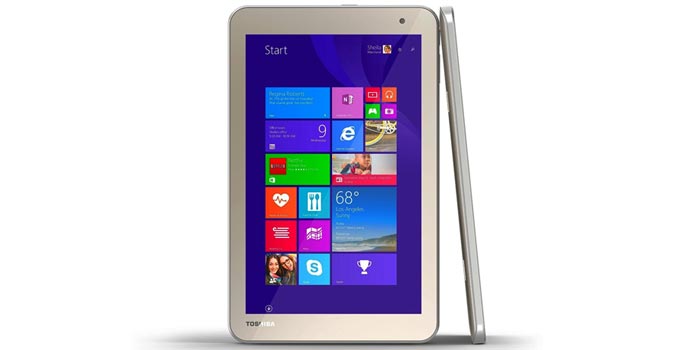 Toshiba has included a microUSB 2.0 port that supports data and charge Y-cables allowing you to juice up the battery and also connect peripherals via OTG at the same time. The slate comes with stereo speakers powered by Dolby Digital Plus and offers up to 10 hours of battery life of general usage.

With video playback, that number drops down to 8 hours which is pretty great as well. The company has employed only 1GB of RAM, but storage provisions are pretty decent at 32GB flash memory and 128GB microSD support. And from Microsoft’s side, there’s a one-year subscription to Office 365.

The Toshiba WT-8 is available exclusively through Amazon India. The slate will have to compete with the Notion Ink Cain 8 which is selling at just Rs 9999.

Facebook
Twitter
Pinterest
Linkedin
ReddIt
Tumblr
Flip
Previous articleSwipe has a cheap iPad substitute in the new Slate Pro tablet, pegged at Rs 10499
Next articleGoogle Nexus 9 goes on sale in India, but only via Amazon