Toshiba and Sharp join hands to Strike an LCD Deal 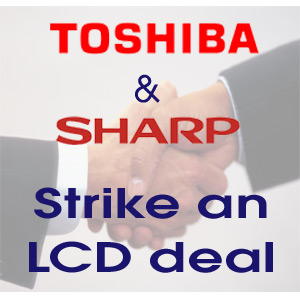 As the year is coming to an end, there’s some uber-exciting news for all you tech-lovers.

Toshiba and Sharp have teamed up, under which the former will now purchase liquid crystal display (LCD) panels from Sharp.

A factory which is slated to open in March 2010 is being developed in Sakai, Osaka region. The 380 billion yen, which will produce 40-to 60-inch Sharp LCD panels, is touted to be the largest of its kind.

“It would be difficult for one company to do everything on its own. It’s necessary to join forces with others that have complementary strengths,” stated Atsutoshi Nishida, Toshiba’s President.

In addition, Toshiba could also be in the works of customized TV chips, which can tackle all the tasks a flat-screen requires.

Though the financial terms of the deal have yet not been revealed, apparently Sharp did maintain that intends buying half of its LSIs from Toshiba by 2010. Further more, Toshiba also plans to acquire 40 percent of its LCDs from Sharp in the same timeframe.