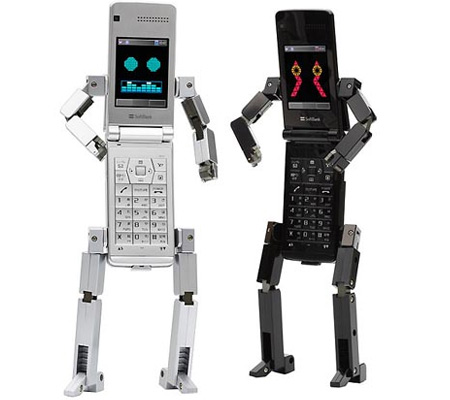 Are you a fan of the movie “Transformers” and all things mecha, or perhaps a fan of robots? Well, then this news will surely interest you. Softbank Japan unveiled a transforming mecha mobile phone dubbed the 815T PB.

This 3G phone which looks just like a robot was manufactured by Toshiba and unveiled by TV Tokyo, SoftBank and Toshiba at a joint press conference.

The Toshiba 815T PB handset is able to be transformed in different ways. In fact, this cell phone is one of the ‘stars’ in a new Japanese TV show called Ketai Sousakan 7, which stars a series of transforming cell phones!

Basically, a kit is provided with the Toshiba 815T PB handset, parts of which can be glued to the back of the handset. It then begins to look much like a robot.

But, other than the transforming abilities of the Toshiba 815T PB phone, this device also offers usual features such as a QVGA display, a 3.2 mega pixel camera and a whole lot of other multimedia applications.

As of now, no further details of the price and availability of these transforming phones have been announced. We’ll just have to wait and watch till then!