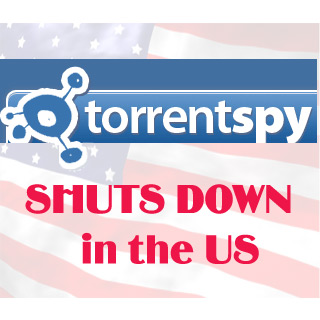 On Sunday night, popular BitTorrent indexing Website TorrentSpy, started blocking US-based IP addresses from using its search engines, revealed Ira Rothken, TorrentSpy’s lawyer. So what exactly is the intention behind this drastic act? Well, this move is apparently in direct response to a federal court order that was passed this year, which wanted the search engine to start logging users’ IP addresses and activity.

In 2006, the Motion Picture Association of America (MPAA) dragged TorrentSpy to court, accusing the site of alleged copyright infringement by helping users in trading pirated material via file-sharing networks. A privacy policy is maintained by TorrentSpy in which the site assures users that it will not gather any personal data about them without their permission. However a judge ordered the service to start tracking users and surrender the collected data to the MPAA. The judge, however, permitted that TorrentSpy could mask the IP addresses of users for the point in time.

When the judgment was first announced, Rothken stated that TorrentSpy would possibly do away with US users instead of breaching its privacy policy and handing over customer information. Though TorrentSpy is appealing the decision, it kept up to its word of “protecting the privacy of its users” by blocking U.S. users.

On the official TorrentSpy blog, the company stated that this was not remotely connected to the impending ruling, pointing to an “uncertain legal climate in the United States regarding user privacy” and differences in U.S. and European privacy law.

Furthermore, TorrentSpy maintained that since its servers are located in the Netherlands, users who are located outside the US will be able to easily access the site.

So if you are a US-based user and try to access or search something on TorrentSpy, then get ready to receive the following message: 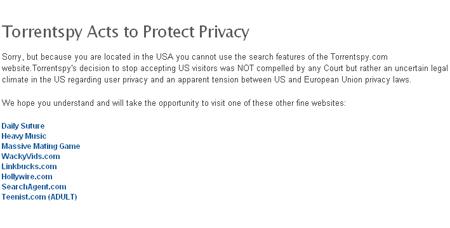