Here are the best MAME games we’ve picked from the hordes available out there. New PS3 and Xbox games are welcome any day of the week. But once the temperature warms up to ‘nostalgia,’ give us some good old arcade fun on our PC. If you already have the emulator application on your machine, the chances are that you’ve played most of the following options we’ve listed, but have missed at least one of them. Check them out – 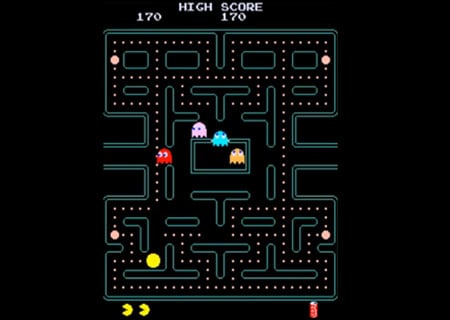 A Bally Midway release, this all-time top favorite takes most of the original Pac-Man game and develops on it a little. The way you play Pac-Man Plus remains practically the same – you’re a yellow, ghost-munching character whose aim is to eat the Pac-Dots in the maze while making sure you don’t bump into the ghosts. Eating a power pellet here does not always turn the ghosts into appetizers for extra points. 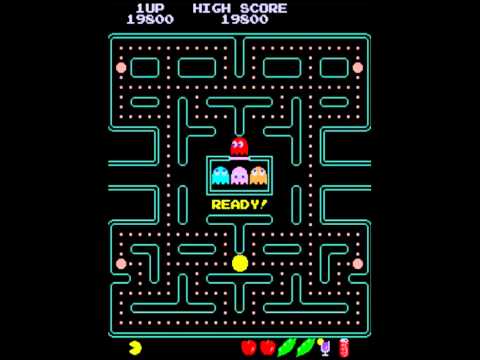 Sometimes, chowing down on a pellet makes the maze invisible, a ghost becomes vulnerable as well as hidden and so on. The coolest additions to this Pac-Man Plus version are the Coke cans which serve as one of the various types of prizes. You can also win green beans, cocktails, gift-boxes, and cakes right through the different stages. 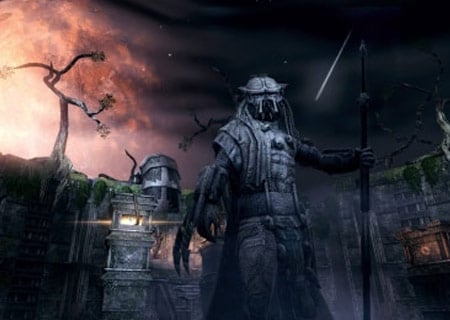 Capcom has a real gem in the form of Alien vs. Predator for all you beat em’ up fans who want to relive those side-scrolling glory days. The Mame game was tailored to be a three-player which allows people to choose one from any four protagonists – Major Dutch Schaefer, Lieutenant Linn Kurosawa, Predator Warrior and Predator Hunter. 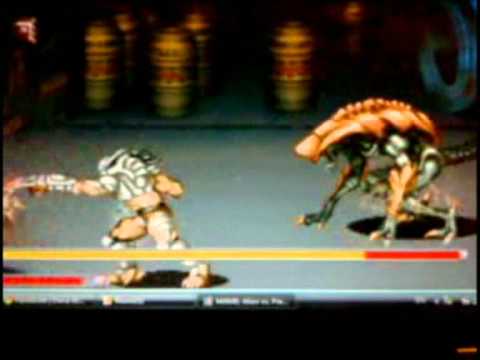 The plot is set in San Drad, California, which has been infested by Aliens. Schaefer and Kurosawa have joined forces with the two Predators to get rid of this menace. You will be fighting the Alien hordes through some environments in various combat styles and equipped according to the character you pick. We like the flamethrower the most and the fact that you can pluck weapons from the hands of your fallen enemies. 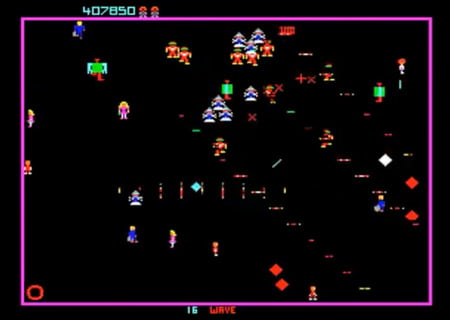 It’s the year 2084 and robots have turned against mankind (Detective Del Spooner was right). In this third contender which finds a place in our MAME games lineup, your job is to rescue the very last human family while dodging the onslaught of the Robotrons. Each stage is called a wave, some in which a family member is wandering around in danger of being eliminated by all sorts of robots. You need to stay alive while playing rescuer at the same time delivers a sense of urgency to all the button-mashing fun.

Published by Williams Electronics, the enemies are shaped in the form of Brains, Enforcers, Grunts, Tanks, and Hulks. Enforcers are built by Spheroids and Tanks are created by Quarks. Armed with merely a blaster in hand, you can score points by saving the humans and destroying your enemies with their hearts of steel.

4. Captain America and The Avengers 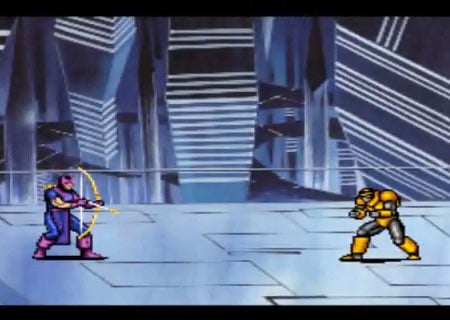 If you’ve read the comics and watched the movies, but are yet to play this classic, hurry up already. This side-scrolling action and shooter feature four playable protagonists – Iron Man, Vision, Hawkeye and Captain America, of course. Depending on the armor you suit up in, you will be able to use Avenger Attacks involving repulsor rays, solar beams, arrows and the shield, respectively.

Your goal is to defeat the evil Red Skull and his henchmen through five stages. When you manage to gather special power-ups, you will get extra assistance from Namor the Sub-Mariner, Wasp, Quicksilver or Wonder Man. 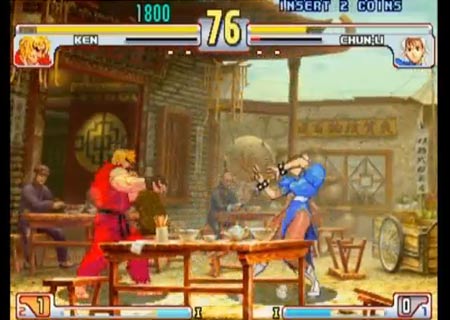 Among the top contenders in the hall of fame for fighting games is the Street Fighter series by Capcom. This third installment introduces Chun Li as well as five other characters – Makoto, Twelve, Q, and Remy.

There are new commands for Throws/Holds. Leap Attacks and Air Parries in this version if you compare it to 2nd Impact. Street Fighter III 3rd Strike: Fight for the Future has got everything you’d hope for from an offering of its genre – super combo moves, catchy music, interesting characters and most important of them all, fireballs. 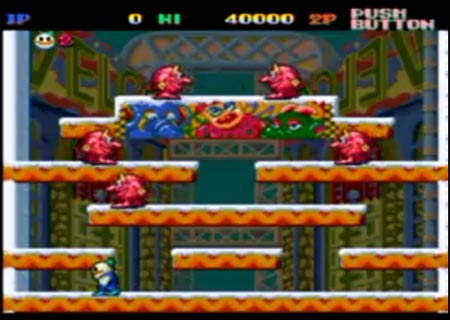 Bringing the count of best MAME games to half a dozen is Snow Bros., a two-player game that was launched in 1986. Nick and Tom are the two protagonists who must eliminate their enemies by throwing snow at them and then rolling the creatures off to their end once they’re fully covered in snow. 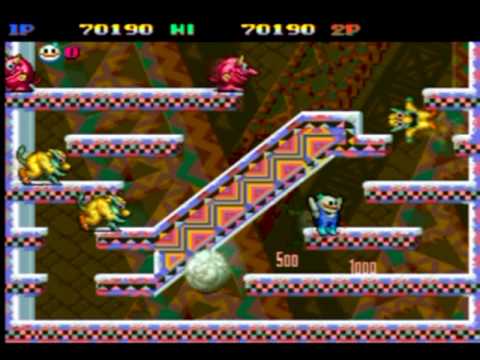 A lot of fun elements are thrown into the mix and collecting potion bottles is just one part of it. Red and yellow are for speeding up and flinging the snow farther than usual, respectively. Blue increases the amount of snow thrown, while green gives wings to your character and allows him to fly around a little and knock out the villains. 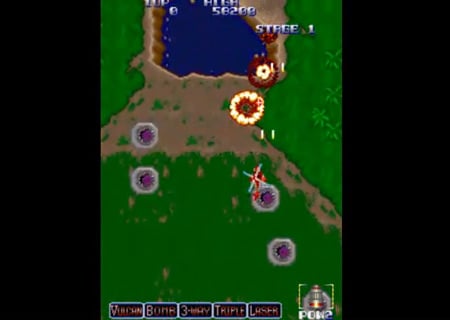 Konami churned out a delightful vertical shooter game dubbed Ajax, in 1987. The backdrop puts you in the cockpit of a fighter jet or helicopter, and it is your job to save the Earth from alien invaders. Be careful with your choice of crafts we’ve mentioned above; the experience is not the same for both. 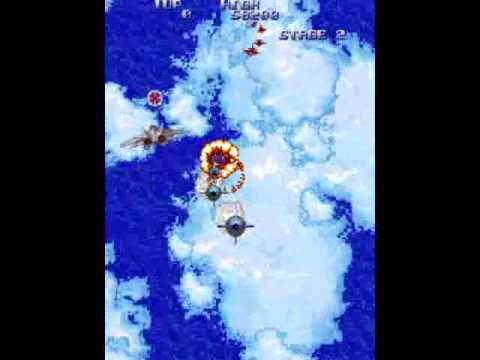 When you pick the chopper, a selection of weapons covering Bomb, 3-Way, Vulcan, Triple, and Laser will be at your disposal. You can wield only one of these at a time, though the Bomb sticks with you throughout your attack. Prefer to fly the fighter jet? All you can use are bombs and a machine gun. Fire away! 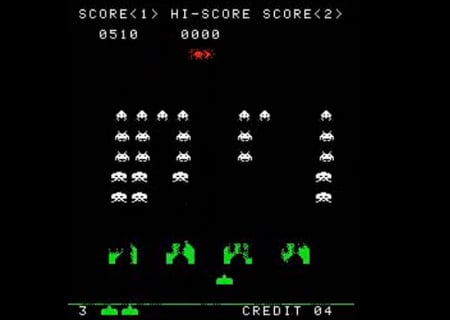 Love the simple, addictive nature of Galaga, Galaxian, Asteroids and other such offerings? Well, you have Tomohiro Nishikado and his innovative imagination to thank for that. Back in 1978, the entire world of arcade machines was turned on its head. It was the attack of Space Invaders. Numerous others like the ones we’ve already noted have taken inspiration from the idea behind it and the mechanics which involve you moving your base from left to right and vice versa while shooting down the alien hordes coming at you.

Some might say the way everything plays out is the best part of the title. But you cannot fail to be captured by the enigmatic background sounds which get urgent and rhythmic depending on the situation at hand. If an alien ghost were to haunt our nightmares, that’s precisely what it would sound like. 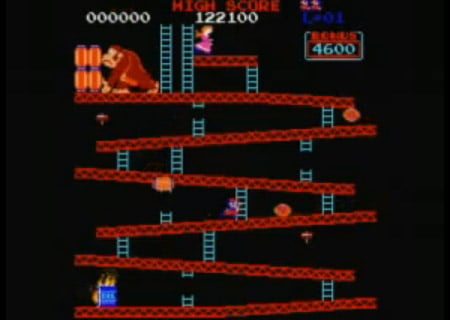 An ode to King Kong no doubt, this one in our collection of MAME games was released by Nintendo in 1981. The plot is simple enough; it’s set in a construction site where Donkey Kong is holding Mario’s girlfriend Pauline, captive. Your goal is to rescue Pauline from the villainous ape’s clutches while dodging obstacles, jumping over them and climbing ladders to the next level. 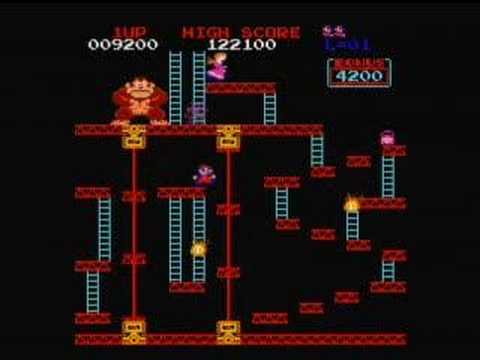 The obstacles come in the form of rivets, barrels, fireballs and cement tubs. Until you reach the Rivet level in which the kidnapper is successfully defeated, the Girder, Elevator and Conveyor Belt stages will only see Kong grabbing the girl and taking her higher up the building site. For those who don’t know, this happens to be the game in which the lovable Italian plumber first made his debut. 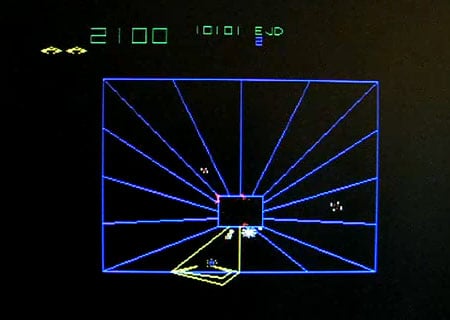 The last option on our list is Tempest, an offering that is entirely different from all the others in this lineup. Let loose by Atari in 1981; it presents players with visuals of geometrical structures which are 3D tunnels from which enemies emerge. 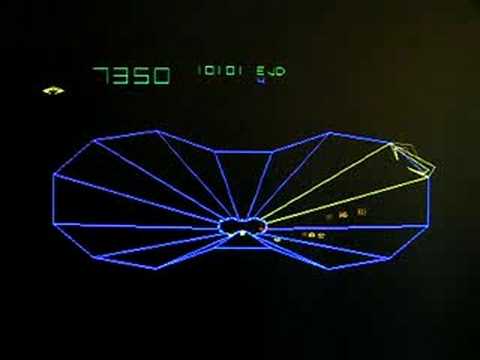 Your job is to take charge of your ship and concentrate your firepower to annihilate the swarming hordes. You can go in for rapid-fire shots and even set off the Superzapper. But pay heed, the last mentioned which kills all enemies in the field will only work effectively once per level. And you must avoid collisions, shots or the green spikes which are remnants of your warps.

Before we wrap up – need help with how you can get started? The YouTube video we’ve posted below should be of assistance.

Next, you can depend on our lineup of the best MAME games to sort you out in the content department. You have to keep in mind that it’s all about the old-school experience here. So simple mechanics, plain plots and low-resolution visuals are on the plate. On the other hand, if you’re already into such games, do tell us about your favorites in the comments section below.