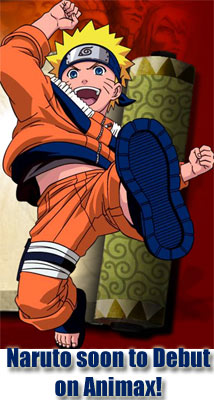 Fans of Naruto are in for some really good news. Literally, the hottest Anime series going around, Naruto is all set to grace the Indian TV screen. Animax India is in talks to acquire the license to air Naruto in India.

Anime fans and Otakus will be able watch Naruto on Animax by as early as August.

The general storyline of both the NARUTO manga and animated series depict the adventures of a young boy named Uzumaki Naruto who trains to become a ninja. Naruto, cursed with the spirit of the nine-tailed fox demon sealed within his body, is forced to live a bullied life discriminated against by his fellow villagers. But Naruto is resilient and undaunted and his determination often inspires those around him.

Through the adventures, the young ninja learns the importance of friendship, teamwork, loyalty, hard work, creativity, ingenuity, and right vs. wrong.

During an interview in February this year with Country Head of Animax India, Sunder Aaron, we had suggested that the channel launch popular Japanese anime shows like Naruto in India, looks like they really took our suggestion seriously.

Along with Naruto, Animax also plans to launch other popular anime series like Bleach in India. Animax is always looking for feedback on animes shown on their channel, so if you have any requests for anime to be shown on the channel do let us know.