Here are the best AirPlay speakers for those of you with a discerning taste for playing out music free of the limitations Bluetooth imposes on it. The former works over Wi-Fi, while the latter has a set transmission range. Also, though the difference in quality may be barely distinguishable by most folks, there’s no denying that it does exist. So you will basically need one of these or any similar option that supports Apple’s streaming software if you’re all ears for nothing but quality music. 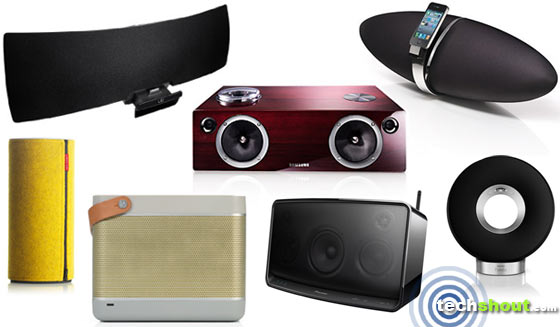 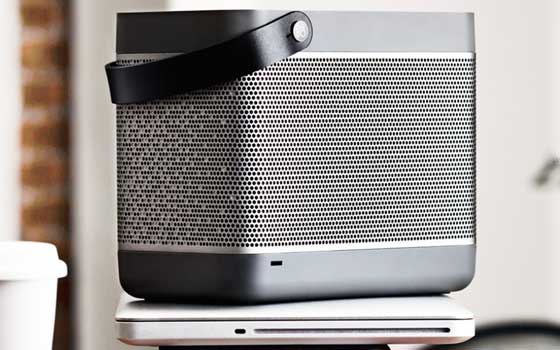 Wondering why you’d be tempted to fork out $800 for a picnic basket? The sound quality is great, the design will let it mingle will other stuff lying around in your house (some feel that it’s not necessarily a good thing), there’s approximately 8 hours of battery life to look forward to and it’s portable. You will have to sync the boombox with a Wi-Fi network before diving into wireless streaming.

Once you’ve done that, jamming to your iTunes content won’t be a problem at all. But if you’re going to be using it minus the wires, the battery can only stretch as much as 4 hours. The controls are presented in the form of capacitive buttons on the top which also serves as a tray for your gadgets. The colors you can choose from include light gray, blue, dark gray and yellow. Do note – B&O Play hasn’t packed a remote control into the bundle. 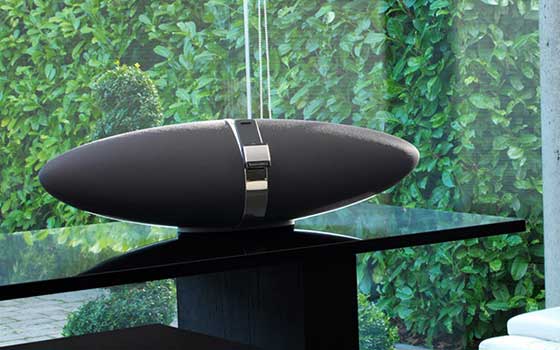 Got $600 to spare? The Zeppelin Air will be glad to serenade you with all the music you’ve stuffed into your locker. Those of you who haven’t dealt with such units before may have a spot of trouble connecting it over Wi-Fi, but what’s the user manual for? At any rate, you can’t be paying so much for it without being willing to spend some time setting it up.

Depending on your iOS gadget, you can grab the model with the 30-pin connector or the one with the Lightning connector. It blares out music through Wi-Fi or Ethernet, delivers powerful bass and comes stuffed with a 5-inch sub-woofer, 3-inch squawkers and a pair of 1-inch Nautilus tube aluminum tweeters. Bowers & Wilkins does audio very well, so the only thing that should make you reconsider buying the oddly shaped Zeppelin Air is its price tag. 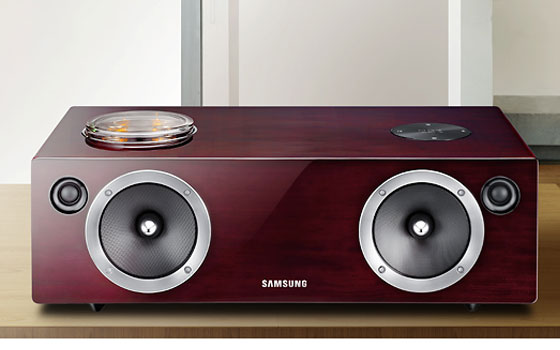 Continuing our array of AirPlay speakers listed in order of their prices, Samsung has a good looking one to boast of with the DA-E750. Its highlight is the dual docking capability which allows you hook it up with an iPhone, iPod or iPad as well as Galaxy Note 2 or Galaxy S2. This can be done via the connector or wirelessly.

The device can handle MP3, WMA and APTX files. The 100W sound hound’s other key features cover 2.1 channel audio, an integrated woofer, the lack of a front display and a Power Bass mode which has received mixed reviews from users. If nothing else, the retro glam look of the wooden build and its vacuum tubes should tempt you into ponying up for it. It’ll carve a $550 hole in your wallet, mind you. 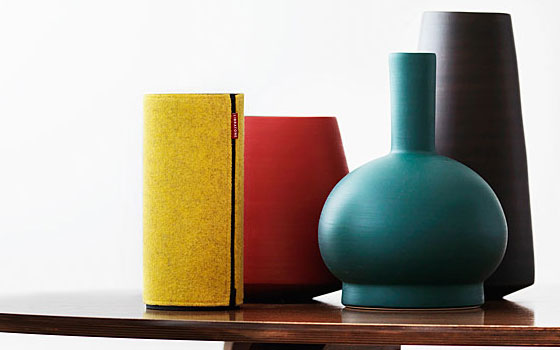 We may like the Live better for its ability to sing proud in large rooms, but if it’s portable option you’re hunting down, the Zipp is your answer. It flaunts a 10.2-inch height and has the circumference of a large coffee mug. Adding to portability factor is a rechargeable battery offering up to 8 hours of wired ‘play time.’

Libratone has dressed the onboard Apple software for PlayDirect technology. Meaning you can use the Zipp to wirelessly stream tracks from a Mac, PC or iOS gadget. Windows and Android users can connect to it over DLNA too. Taken a fancy to the device swaddled in woolen casing and sporting a leather carrying strap? You’d better be prepared to shell out $400. The audio is good for small settings and the woolen cover is not thick enough to muffle it. 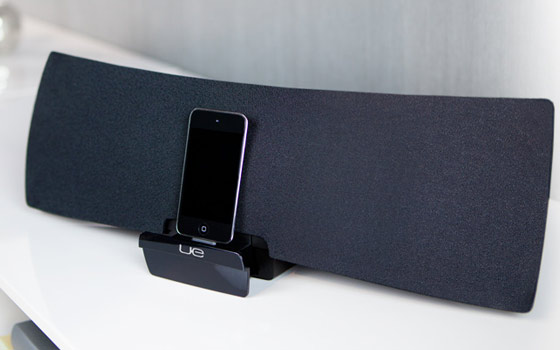 If you’re more of a Logitech fan, this fifth option on our AirPlay speakers lineup is willing to play. The $400 device has nothing revolutionary to show in terms of design, but it’s very easy to set up. All you have to do is dock your Apple offering and you’ll be requested to download the relevant iTunes app. After this is done, you will need to punch in your Wi-Fi password. Then let the fun begin.

If you want to fine-tune bass and treble settings, you can do it right from the application’s interface. Bass junkies may have to watch out for one bother though, it doesn’t sound extremely pleasing when the volume is set to full blast. Logitech hasn’t designed this one to be portable, so you will need to keep it powered as it works. There’s no remote control in the packaging either, but that shouldn’t hurt when you’re streaming tracks wirelessly and using your iDevice as the remote itself. 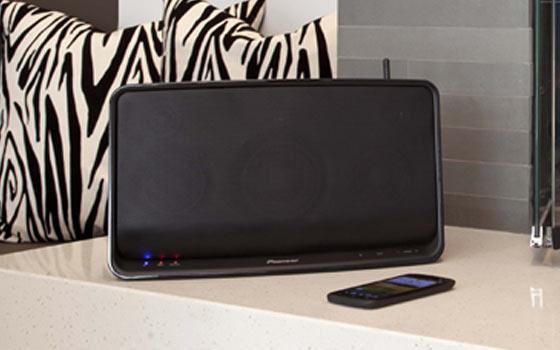 So you’ve got an HTC One series as well as an Apple device? Here’s a sound box just for you. Admittedly, it’s one of the least attractive among the speakers we’ve named so far, but the A4 has a couple of things holding it in high favor. First off, it’s pegged at just $200. The chassis is fitted with two 3-inch squawkers, a 4-inch sub-woofer and a 1-inch tweeter.

The overall sound quality gets a good rating even if bass can be a bit stronger than some like it. A remote control has been thrown into the mix, but it’s a pity there are no equalizer settings to get the bass issue out of the way. After using the device you will be able to confess that the inbuilt drivers and three amps do their job pretty well for the price you pay for the unit. 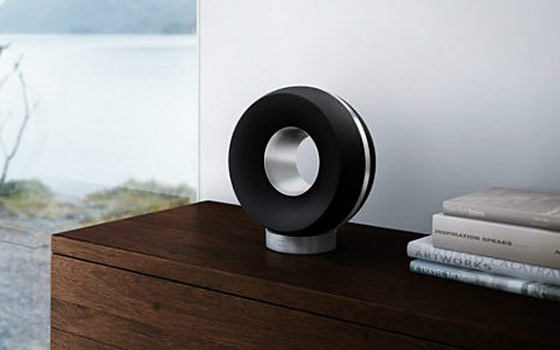 Even if you don’t like the design of the SoundRing for whatever reason, you may fall for its $166 price (on Amazon). Just like the Zeppelin Air, we know we’d buy it just to have a curiously designed device such as this on our desktop. You can choose to keep it wired to a power source or carry it around and maybe enjoy some music out on the deck owing to its backup battery.

Don’t expect a hard, knockout punch when you listen to music and then you won’t be disappointed by the quality of the Fidelio. We’re not saying it’s a below average choice, it will just work optimally for you in smaller spaces. With 16W RMS of total output power, the unit allows you to play your songs wirelessly or even via the connector.

Did you take your favorite pick from the best AirPlay speakers we’ve listed above? Yes, we did notice that most of these options have a daunting price tag, and this partially because of licensing fees for the software. But Apple’s only taking what’s owed to it, right? What do you think about the options we’ve presented to you? Or is Bluetooth good enough for you?