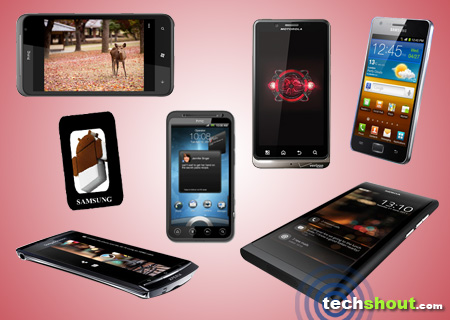 We’re probably going to attract a lot of ire from Apple fans for daring to pull up a list of the top 7 iPhone competitors in 2011. Trust us on this one, we actually know iPhone bearers who think it’s beyond comparison, an entity by itself, the very paragon of what all smartphones should be like. But Plucky is our middle name and here are 7 options you may also want to consider when looking out for a spiffy smartphone.

1. Samsung Galaxy S II: Packing in a 1.2GHz dual core processor and Gingerbread, the phone sports a generous 4.3” WVGA Super AMOLED Plus Corning Gorilla Glass display and the TouchWiz interface. Its dimensions measure a slick 125.3mm x 66,1mm x 8.4mm and there’s a pair of cameras, an 8MP AF one on the back and a 2MP front facing snapper too. This 4G-capable Samsung handset is chalked to reach AT&T, T-Mobile and Sprint some time this month. As to the likely pricing and exact availability date, our guess is as good as yours.

2. Motorola Droid Bionic: Verizon Wireless was said to have bagged this one for their 4G LTE network back in January. The Motorola Droid Bionic embeds a 1.2GHz dual core CPU and a 4.2” qHD touchscreen. An 8MP camera sits on the back panel and a VGA-type on the face. Thicker than our first nominee by around 2.5mm, the phone runs Android 2.3.4. It also happens to be HTML5 and Flash compatible, the last mentioned of which Apple has been looking away from quite vehemently. And if you feel like porting content to a larger screen, depend on the integrated HDMI port and Mirror mode technology.

3. HTC Evo 3D: Picture 3D and this image of people wearing awkward looking glasses and oblivious to rest of the world pops up. The HTC Evo 3D is not the first mobile device to go the ‘glasses-free’ 3D route, but it’s quite a ‘smart phone’ to reckon with. Chugging along on a Qualcomm 1.2GHz dual core Snapdragon processor, it uses dual 5MP cameras for 3D content capturing and renders up to 32GB of storage. The Android 2.3 handset connects to Wi-Fi networks and Bluetooth 3.0. Accommodating DLNA too, it may not be much of looker as compared to the iPhone, but the spec sheet shouldn’t fail to impress.

4. Nokia N9: Okay, so the Nokia N9 didn’t get around much, or barely did so, if compared to Apple’s baby. But if looks could kill, it’d probably rate more on the ‘fatal attraction scale’ according to us. Thought the iPhone is almost buttonless as placed against other touchscreens with its single round key below the touchscreen? Well, this MeeGo device which is most likely to soon be labeled a collector’s item snatched that crown back in June. Volume rockers, a camera key and a power button are all that interrupts its edges and the rest of the phone is ‘pure touch’ says the Finnish manufacturer.

5. Samsung Nexus Prime: No one may really know what the Samsung Nexus Prime looks like. But it’s the stuff of rumors anyway, owing mostly to the fact that everyone concerned seems sure it will be the first or among the first to run Ice Cream Sandwich, Google’s officially announced spin on the next Android version. How that translates into a contender on the top 7 iPhone competitors in 2011 is a rather vague opinion. All we get to chew over for now are speculated features naming a 720p resolution Super AMOLED HD screen and an OMAP4460 processor.

6. Sony Ericsson Xperia arc S: Another rival when it comes to aesthetics, the phone looks very similar to its predecessor. It tips the scale at 4.1oz and shows off dimensions at 125mm x 63mm x 8.7mm. Sony will be offering a choice of pure white, misty silver, midnight blue, Sakura pink or gloss black whenever they do happen to launch it. In terms of tech specs, the device has Android 2.3, up to 32GB supported memory, a 4.2” 854 x 480p resolution TFT display and 8.1MP camera with 16x zoom and 720p video recording.

7. HTC Titan: Wondering whether Windows Phone Mango will be backing any possible competitors? Well, the HTC Titan looks like an interesting slab of work from the Taiwanese manufacturer. AT&T has already geared up to launch the smartphone, though they’ve not come clean on the pricing and precise availability date. The Titan will hold a 4.7” touchscreen to its face and proffer access to Xbox Live games, of course. Running on a 1GHz processor, it incorporates an 8MP camera with dual LED flash and claims a 131.5mm x 70.7mm x 9.9 unibody design.

Think our list of the top 7 iPhone competitors in 2011 is still incomplete? Tell us about the ones we’ve missed.