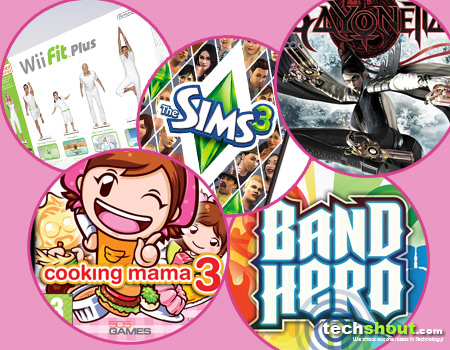 Woman’s Day is fast approaching and it is that time of the year once again where we get to pamper our female friends and show them just how much they are appreciated. To do so, many individuals resort to giving their special women chocolates, sugar-coated candy, teddy bears, jewelry and the list goes on. This Women’s Day, how about gifting them something a bit out of the ordinary and away from the other cliched items? You can present your girl with a variety of games that will surely appeal to her and also keep her engaged for hours on end.

The market is buzzing with a plethora of games featuring loads of different genres like first-person shooters, role-playing games, puzzles, casual titles and simulations. These titles are compatible with many gaming consoles like the Xbox 360, PlayStation 3, Nintendo Wii as well as portable ones like PSP and Nintendo DS and DSi. We now dish out a few games that we feel would get your woman’s fingers cracking and all set to wield that controller or portable gaming console.

First up is the popular game fashioned especially for the Nintendo Wii dubbed as the Wii Fit Plus. This game lets players go out ‘fighting fit’ and stay in shape and active the fun way. Gone are the days where we had to spend money on gyms or hours jogging around the park. With the Wii Fit Plus, you can stay fit while in the comfort of your very own home. All you need is a Nintendo Wii gaming console and a copy of the game. There is also a Wii Balance Board accessory which is compatible with the Wii Fit Plus game. The device accurately detects your movements and in turn portrays them perfectly onscreen.

You can create your own personalized workout regime to suit your time-table and capacity. The game includes many famous features such as yoga, aerobics, strength training and balance activities. Besides housing these fun features, the title also offers 20 new activities like a Segway course and skateboarding. You can opt for a particular routine which targets specific areas and goals. This allows you to fathom just how many calories you burn with each workout. The intervals can also be altered from five minutes to up to sixty minutes. The Wii Balance Board accessory can be found either packaged along with the game for a price of $99.99 or even the Wii Fit Plus software can be purchased separately for $19.99.

Women always love to try out new dishes and come up with something innovative all the time. To further make their culinary experience an absolute pleasure, we suggest the Cooking Mama 3 game. This cookery simulation-styled title is compatible with the portable Nintendo DS and offers a little something for your female friend who has a fetish for food. There are more than 80 recipes, 200 mini games and classic Mama gameplay to take advantage of. The game serves up to three new game modes namely Let’s Match!, Let’s Shop! and Cooking Contest. The former mode lets you cook up your own dish by using different ingredients and methods of preparation from other dishes. Let’s Shop! enables you to gather different ingredients for Mama but within a set time limit and while avoiding other shoppers, clearing spillages and helping out at the checkout. The third mode sees just who emerges as the fastest chef through performing various activities. This delicious treat can be acquired for $27.99 for the Nintendo DS.

Up next we have the popular and acclaimed The Sims 3 game for the PC and Mac. This title is noted to be the best-selling PC launch in EA’s history. The game offers you the ability to fashion your very own Sim in the Create a Sim Mode as well as many exciting short and long term goals to engage in. You can give your Sims a choice of various traits ranging from artistic, clumsy, paranoid, romantic, kleptomaniac and brave. There are also loads of in-game items like furniture and clothing which can be downloaded by simply going online to The Sims 3 Store. Sims movies can also be made with the help of the provided editing tools. These movies can later be shared with friends across the community. The Sims 3 can be acquired for $49.99 while a Collector’s Edition would cost you $69.99.

Another interesting game that would catch the fancy of your female friend is Bayonetta. This game exuberates with the energy of a gun-wielding witch who goes by the name of Bayonetta. Girls will love the action dished out by taking on the role of the protagonist as she goes in search of her true purpose and faces the various elements of her past. The journey is packed with angels and loads of fantastic foes which the agile witch must face bravely without backing down. She is aided in combat by different powerful weapons as well as magic, acrobatics and her awesome hair. After her 500 year slumber, she is bound to deal some serious damage onto the foes responsible for her situation. The PS3 and Xbox 360 version of the game can be purchased for around $59 each.

To finally end the list we have Band Hero cruising into the array. By presenting your special women this offering, you can unleash the rockstar within her. She can let her hair down loose and jam to all her favorite songs. The game is packed with a plethora of foot-tapping songs. These include tracks from Evanescence, Counting Crows, Jesse McCartney, Janet Jackson, The Rolling Stones, Tonic, No Doubt, David Bowie, Hinder, Taylor Swift and the list goes on. She can groove to the tunes of American Pie, Don’t Speak and Kung Fu Fighting either alone or with a complete band. This is possible as the game supports full band play. They can pluck some mean strings with the lead and bass guitar, hit the drums with a bang or sing along to the tracks with the help of a microphone and the onscreen lyrics. The entire Band Hero kit on either Xbox 360 or PS3 is priced at $179.99 while just the copy of the game bears a cost of $49.99.

We hope these suggestions would help you pick up the right game for your lucky girl this Women’s Day. So just watch her eyes light up and see a wide smile form on her face when she sees the game you present her. Don’t forget to however seal the gift with a peck on the cheek for that complete effect.