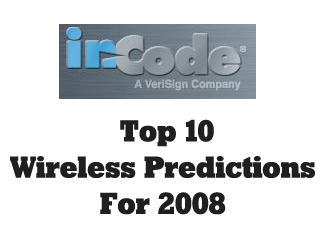 inCode, a VeriSign Company has announced its Top 10 predictions that could change the shape of the wireless industry in 2008.

Some of the highlights of the predictions are:

“The coming year is going to be incredibly important for the wireless industry as new business models begin to take shape,” said Jorge Fuenzalida, vice president of communications consulting for inCode, a VeriSign company.

“Beginning with the spectrum auction in January, to the continuing battle between fourth-generation (4G) technologies LTE and WiMAX, to what it’s going to take to make converged wireless a reality, wireless will look significantly different in several critical ways one year from today,” Fuenzalida added.

The report clearly indicates that the age of wireless communication has surely set in.