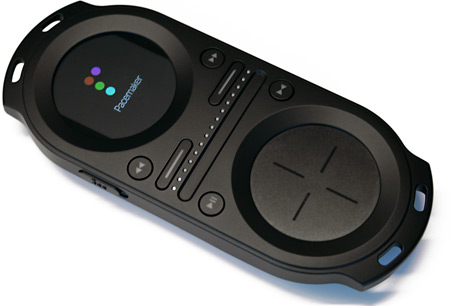 Tonium, a Swedish company will soon be shipping the pint-sized DJ system called the Pacemaker. It claims to be the world’s first professional pocket DJ unit.

The Pacemaker is basically a portable music player which has a 120GB hard drive. Further, all you DJs in the making will benefit from using this gadget as it leys you practice and refine your mixing skills, wherever you may be. Now, you won’t need to be stuck in the confines of your studio or perhaps even your room where your DJ turntable is set up!

Roughly the size of a Sony PSP portable gaming system, the Pacemaker also sports an integrated crossfader and a multifunction touchpad, which provides an easy and intuitive way to control your music mix.

The Tonium Pacemaker DJ system allows wannabe DJs to save their mixes on the hard disk drive. And, if you want to show of your mixing skills to others, you can always share your mixes with other wannabe DJs on the Pacemaker online platform.

The Tonium Pacemaker DJ units have begun shipping, the price of which is fixed at $762. You can place an order for the same on Tonium’s web site.