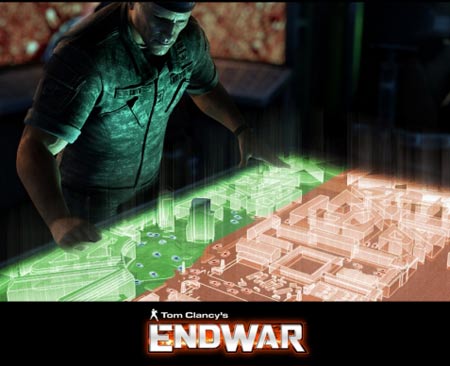 Ubisoft has spilled a few more beans on the upcoming and much-awaited tom Clancy’s EndWar. At the Ubidays press conference, Ubisoft revealed that gamers will be able to play Tom Clancy’s EndWar solely through voice commands.

It was also mentioned that gamers will have the option to use a joypad.

Tom Clancy’s EndWar happens to be the first new game that Ubisoft has created since Splinter Cell.

Ubisoft described Tom Clancy’s EndWar in a very unique way, asking gamers to imagine the apocalypse as a techno thriller. The game is a strategy game with online multiplayer for next-genartion consoles, set on the battlefields of World War III.

Tom Clancy’s EndWar will also have a new kind of camera positioning. The game is expected to be very similar to the kind of low camera that gamers must have experienced in the Madden series.

Tom Clancy’s EndWar will release for the PS3 and the Xbox 360. However, Ubisoft has not yet revealed the exact launch date of the game.

Last month, we had reported on a mysterious Web site by Ubisoft that was actually a viral marketing scheme for EndWar.