It’s not often that we review watches here on our site, but the Tokyoflash Kisai Rorschach presented itself as quite an intriguing and strangely puzzling product which we just had to get our hands on. After all it’s a watch aimed at making it as strenuous as possible for you to read time. That’s like going to a restaurant with a tremendous appetite for fried chicken only to realize you have to catch the chicken first before they can cook it. No seriously, Tokyoflash has the distinction of coming up with these unique wrist watches that make it hard for you to read time. But once you get used to them, you are the only one among your friends who’ll be able to tell time by looking at them. Bet that’d do wonders for your self esteem. Let’s put this device through its paces and try to decipher its code, or to put it simply, let’s try to read some time. 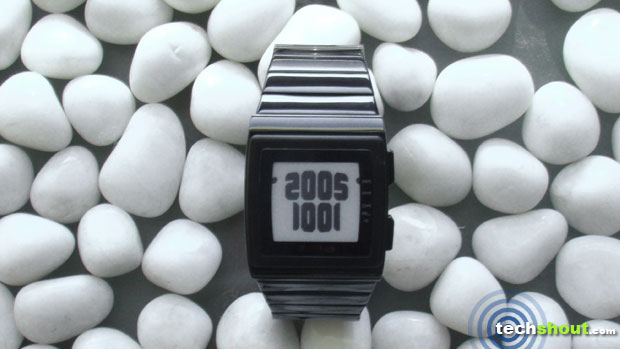 How to read time:

Unlike some other watches which the company produces, the Tokyoflash Kisai Rorschach at least has some kind of digits on its screen. However, at first attempt they’re a bit too much to handle. In order to read time on this particular watch you need to understand the concept of the inkblot test devised by Swiss psychiatrist Hermann Rorschach (hence the name). Arbitrary blots of ink were used by him in order to appraise a patient’s psychological characteristics. No don’t be bewildered now; the watch does not serve that particular purpose. It just takes those inkblots and creates similar-looking digits on its display.

Deciphering the inkblot digits on our own was quite a task. We passed the watch around to a number of our colleagues to see if they could crack the code, but it wasn’t to be. Their perplexed faces on attempting to read time on it made for some funny sights, and at last we had to surrender ourselves to the user manual to find out how to. The Tokyoflash Kisai Rorschach does not display seconds, so get that out of your mind first. It places the hours at the top-right of its screen, whereas the minutes are kept at the bottom-left. What occupies the remaining screen space is nothing but an inkblot-like reflection of these digits. Cheeky huh? That’s pretty much the concept of this wrist watch, and once you get used to it, reading the date, setting an alarm and other similar tasks won’t present themselves as rocket science. 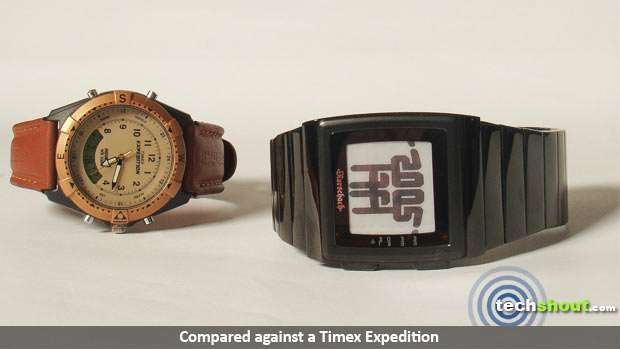 This particular product is sold in the form of models bearing leather belts as well as stainless steel straps, while the dial ships in white and black options. As is visible, the watch we got to tinker with is a stainless steel version with a black dial. We don’t mind calling it a beautiful looking product, especially since its body has a pretty rich feel to it. The brawny timepiece weighs in at 120 grams which is a bit too heavy if you ask us. However, you can get rid of a few grams by removing some plates on its strap so that it fits your wrist perfectly. If your arm is big enough for the stock strap though you’re out of luck. 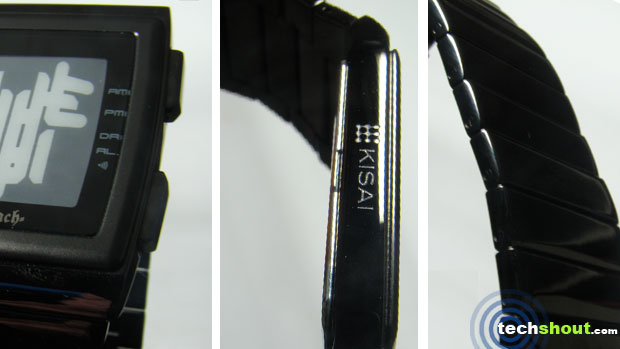 The stainless steel body of the Tokyoflash Kisai Rorschach watch has been blessed with a polished finish bearing sand blasted detail. The dial itself features a display that’s saddled by plastic casing and a glass coating with the word ‘Rorschach’ written on it in silver color. This device only houses two buttons which are placed on its right-hand side, while its left-hand side grabs nothing but a carved ‘Kisai’ logo. The watch fits on your wrist thanks to the good old clasp mechanism on its strap. We’d like to point out that apart from being a fingerprint magnet, this strap is a tad ill-designed. Its smooth surface as well as the weight of the watch’s display makes it slide to the side of your wrists when there’s heavy movement, and it even gives a few pinches when your skin is stuck between its plates. Both these issues will be resolved if you prefer to buy the leather model. 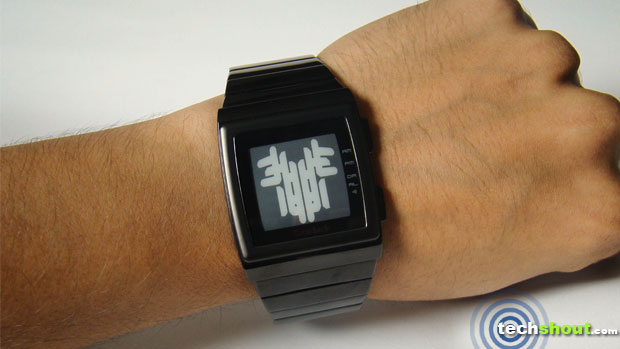 This product features an E Ink display on it which is of the same kind that’s used on e-readers like the Amazon Kindle. Apart from the fact that this unique panel makes for a great style statement and saves on a lot of battery power, there’s one more point which could have led Tokyoflash to place it on this watch. You see, due to this display the device is easily able to tell time in dark conditions, thus eliminating the need for a backlight.

This attractive timepiece gives out a small little beep each time you press any of its buttons. And you’ll be hearing that sound a lot the first time you’ll embark on the long and tricky process of setting its time. The two buttons on the Tokyoflash Kisai Rorschach aren’t pleasant ones to press since they need a good deal of force to fetch any feedback. Along the right side of its display lie indicators which help you know whether you’re looking at the time, the date or the alarm. This is a particularly helpful trait, especially since it gets extremely confusing when you’re trying to fiddle with its settings. 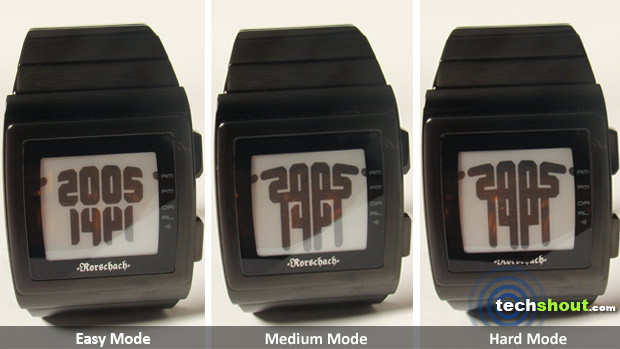 This device comes equipped with three different modes – Easy, Medium and Hard. Needless to say the latter two make the inkblot more complicated so that the time is more difficult to read. Owing to the watch grabbing an E Ink panel, you can further customize its offerings through its display modes. Black on white or white on black are your two main options, and there’s even a cool Sleep mode which apart from saving battery keeps displaying a unique inkblot design until you start using the watch again. 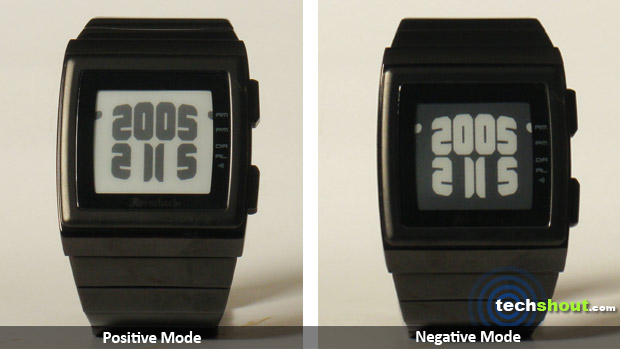 A great part about this mode is that you can set it to be activated for a particular period of time. This means you can put the watch to sleep when you won’t be using it. The CR2016 standard battery on the device is claimed to last at least for a year, but if Sleep mode is used more often, Tokyoflash tells us that the life of the power unit can definitely be extended further. Other important details that have been infused into the watch include a choice for 12-hour and 24-hour versions, a one-click date display and an alarm functionality which is experiencing some problems on the unit we have been provided. There’s no stopwatch present on it if you’re wondering. 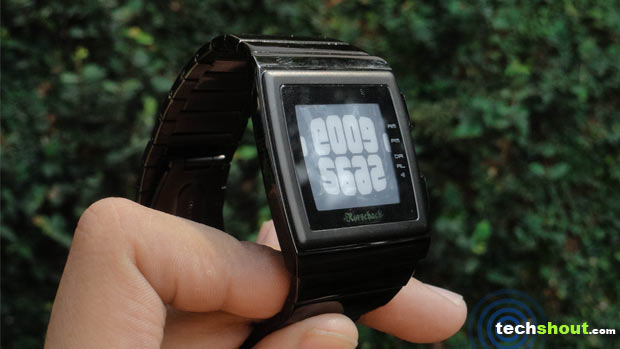 Meaty looking design and two-button layout act in its favor.

Sleep mode which can be set to get activated automatically is a great way to save battery.

Inkblot design is something innovative, even by Tokyoflash’s standards.

Strap is a bit harsh on the wrist owing to its heavy weight.

Button-feedback falls on the non-premium side of things.

There’s not a single peck of doubt that the Tokyoflash Kisai Rorschach has been targeted towards a select portion of consumers. Although we aren’t able to pinpoint who falls under this category, we’re guessing that the geek brigade might love to have a watch that’s based on a psychology test created by an early 20th century psychiatrist hailing from Switzerland. Nonetheless, if you’re willing to buy it have it known that it’s a nice piece of hardware to flaunt. But be prepared to answer the barrage of questions that will be thrown at you by others who’ll try their best to wrap their minds around the crazy digits dancing on your wrist. We give it a 3 out of 5.You can order one for yourself at $199.