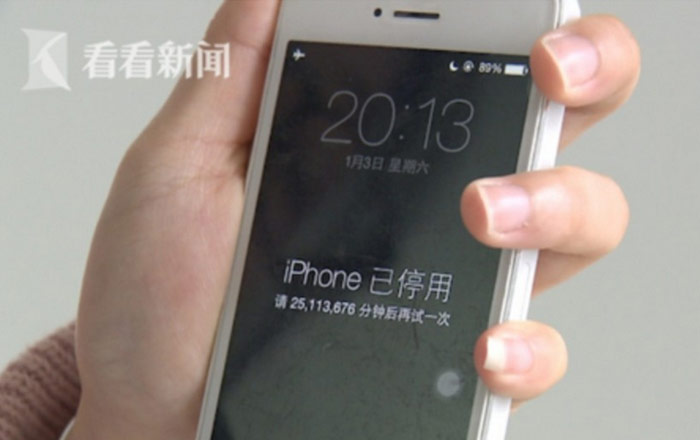 A 2-year-old Chinese boy has made headlines after reports claimed that he had disabled his mother’s iPhone for 47 years. That’s an insane amount of time to wait for a handset to unlock, leaving the mother with no choice but to wipe out her phone.

The incident apparently occurred back in January 2018 when the mother gave her kid the iPhone to watch educational videos on. The child proceeded to enter the wrong passcode over and over again, forcing the iPhone to increase the amount of time which had to pass before it could unfreeze.

For reference, typing the wrong password in an iPhone 6 times in a row will disable the smartphone and force the user to try again in a minute. This time period increases with every wrong attempt. It looks like the toddler repeatedly smashed his fingers against the iPhone, because when the mother came home she says it had gotten disabled for 25 million minutes.

She took her iPhone to an Apple Store in Shanghai, but was told that she had only 2 choices. One was to wait for 25 million minutes AKA 47 years and the other was to erase her device by doing a complete reset. A technician at the outlet claimed that he’d seen cases when the time limit stretched to 80 years.

Meanwhile, the mother has been waiting for 2 months for a better solution to arrive, but doesn’t see any signs of the issue resolving itself anytime soon. She told Kanka News that she can’t really wait for 47 years and tell her grandchild that it was his father’s mistake.

The incident has sparked a bit of a debate in China. Some assert that she should have backed up her data, while others state that she should never have allowed her 2-year-old son to play with the iPhone in the first place.

If you ever find yourself in a similar situation, head to Apple’s support page on the topic and follow the steps listed.