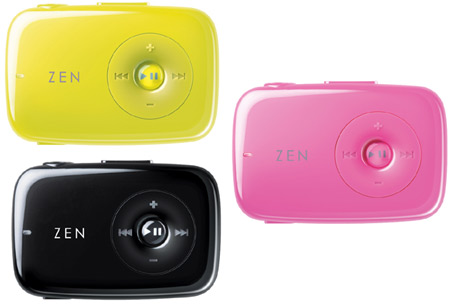 Worldwide leader in digital entertainment products Creative, has just come out with a small, light-weight and inexpensive MP3 player called the Creative ZEN Stone. The ZEN Stone MP3 player comes in a 1GB capacity and is priced at $39.99.

Creative’s latest ZEN Stone MP3 player has a smooth contoured design. This MP3 player is really light and feels natural and comfortable to hold. You could also most think it’s a stone picked up from one of those Japanese Zen gardens. Hence this MP3 player has the name ZEN Stone.

Loading music on to the Creative ZEN Stone is also a breeze. At 1GB capacity, you would be able to store around 250 songs on this player. The player features “Play” and “Random” buttons, so that you can either listen to all the songs listed in order, or in a random order.

However, one thing that the Creative ZEN Stone MP3 player lacks is a screen. But, according to the company, the ZEN Stone is so simple to use, it does not even require a screen.

The Creative ZEN Stone MP3 player can play up to 10 hours of music from just a single charge of the built-in battery.

According to Sim Wong Hoo, Chairman and CEO of Creative, “Whether it’s your only player or a second player to take with you anywhere, the low price lets you think of MP3 players in a whole new way. You can loan it to a friend like you would a CD or a mix tape and not have to worry about it, but you’ll like it so much that you’ll want another, so you always have one on you.”