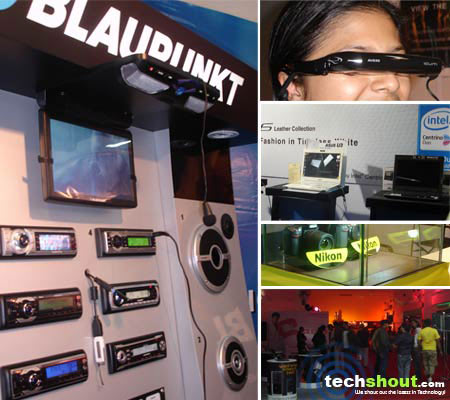 On December 21, 2007, TechShout attended the Times Gizmos and Mobile Show 2007 which took place at the World Trade Center in Mumbai. A number of tech companies showcased their latest products. From handheld devices, mobile, laptops, desktops, gaming peripherals, to futuristic wearable gadgets, the event had it all.

Our first stop was the Blaupunkt stall, which had a number of car decks up on display. A friendly Blaupunkt representative demonstrated the company’s latest offering- the Hamburg MP57 car system which boasted features including on-board Bluetooth, USB connectivity and Front Aux-in. Its unique feature allows the driver of the car to make and receive calls via this player without the need for him/her to use a Bluetooth device or anything of that sort. For a price of Rs.15,950, this car system is wonderful for today’s day and age, when almost every country of the world is banning mobile phones while driving!

Next up was the Mitashi stall which had a few MP3 players, DVD players, speakers, woofers and more on display.

Lenovo’s created a great space for itself at the exhibition, as the company showcased a number of laptops which included really compact ones as well. The representatives were very helpful too, providing all the information that one would need before buying a laptop. If you are planning on buying a laptop or desktop from Lenovo, then we suggest you do so now, because the company is offering some great Christmas offers.

Kodak also had a stall at the Times Gizmos and Mobiles Show, and amongst its trademark yellow and red colors were seen a number of sleek cameras on display.

ASUS showcased some of their laptops and desktops. A notable one to be mentioned is the ASUS Eee PC which is a sub-notebook by ASUS and Intel just the size of a hardback book. The price for this revolutionary device is Rs.18,000.

Sony Ericsson had an exclusive stall as well. The Mobile Store, all made its presence felt at this event which surprisingly had very few mobile phone brands. 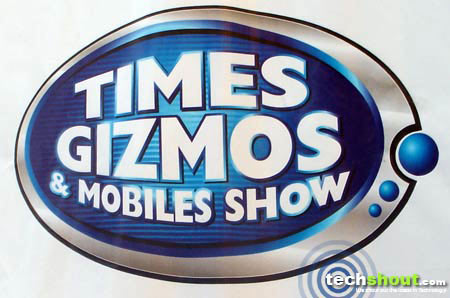 We came to know of a very unique offering by a Mumbai-based company called Games Ka Funda. They offer gamers the chance to rent gamers for a reasonable price too. In case you feel like keeping the game a bit longer, you will have to pay an extra fee. This company was also offering the Xbox 360, PSP and other gaming devices at great prices.

As if to save the best for last, we incidentally came across a great wearable gadget from Vuzix called the iWear AV290. It’s just like a pair a shades, but it also has earphones. Wearing this, you can watch movies from your iPod and mobile phone. And believe me, the experience is just like that of sitting in a theater and watching a movie. My colleague and myself were totally taken up with the iWear AV290. And, to make matters even better, the superb movie Blood Diamond was playing at the time when we checked out this device!

Also taking place simultaneously was the Zapak Live event which had a number of rigged up PCs and equally charged up gamers playing games like Counter Strike. Being the first day of a three day-long tournament, this was just the preliminary round, and today the semi-finals take place, while Sunday will see the finals and players competing to win prizes worth over Rs.2,00,000.

A very thoughtful entrant into the Times Gizmos and Mobile Show 2007 was Greenpeace. A very friendly young man explained to us the whole concept of e-waste. Indeed, it certainly brought about a shift in our conscience, especially since we are tech reporters!

The Times Group deserves a big kudos for putting up great shows ranging right from health, furniture, food to technology and gaming. It sure is a wonderful way for the best brands to reach out to consumers, and an equally good way for consumers to get acquainted with the latest trends, innovations and gadgets in the market. The Times Gizmos and Mobile Show 2007 runs through December 23, 2007. Tech enthusiasts, it’s the event to be at right now!