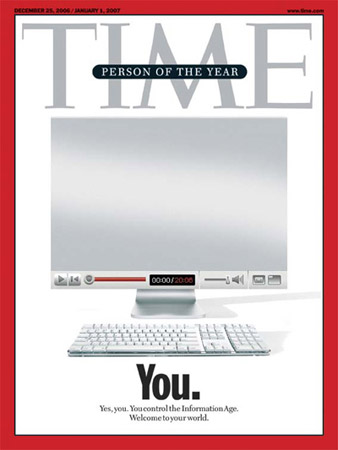 The U.S. magazine Time usually aims to pick a person or persons who have most affected the news and people’s lives, for the good or for ill, and it sure does take a lot to be on the cover of Time magazine, which is read by millions of people all over the world. This year, Time magazine has gone an unusual way, naming “You” as the Time magazine Person of the Year 2006.

Last year, Microsoft founder Bill gates, his wife Melinda and Bono of U2 fame won the accolade and featured on the front cover of the acclaimed Time magazine. Recent winners also include President George W Bush for the Times cover in 2004 and “the American Soldier” in 2003.

Time magazine has chosen “you” to be the Person of the Year mainly for the growth and influence of user-generated content on the Internet. The U.S magazine, which covers global news, praised the public for “seizing the reins of the global media”, and filling the Web’s virtual world.

This year, instead of focusing on conflict or even goodwill, Time magazine has shown life through a different lens. If you think about it, the Interent is nothting but a web of contributions made by people in some way or the other. And this information has proven to be useful down the line.

Time magazine said the naming a collectivity, rather than an individual reflected the way the Internet was shifting the balance of powers within the media, through mediums such as blogs, videos and social networks.

In fact, in this last issue of the year, Times has cited websites like YouTube, MySpace, FaceBook and Wikipedia, for allowing users to interact with the Web, by uploading and publishing their own comments, pictures, videos and links.

Times magazine’s Lev Grossman wrote, “”It’s about the many wresting power from the few and helping one another for nothing and how that will not only change the world, but also change the way the world changes.”