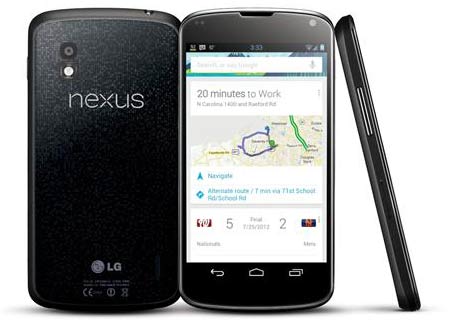 With the price and release date details for the Google Nexus 4 through Three UK now out, the latest flagship Android smartphone is all set to venture through another carrier in the country.

The Nexus 4 is manufactured by LG and it is said to be a variant of the popular Optimus G handset. Both phones proffer similar features and hardware components such as a quad core Snapdragon processor with Adreno 320 graphics, 2GB of RAM, a 4.7-inch HD display and an 8MP camera. Some versions of the latter arrive with a 13MP snapper instead. The phone will operate on the carrier’s DC HSDPA network. In recent news, both 8GB and 16GB options of the smartphone are said to be out of stock in the US. After Google ran out of units, it started referring customers to the 16GB T-Mobile version. 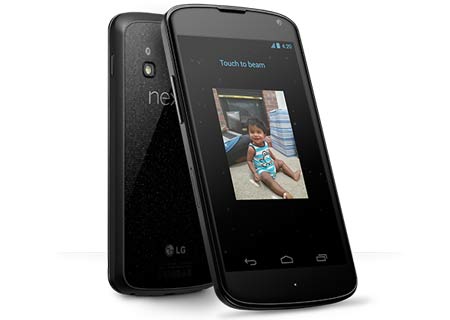 Well, this variant was slated to be sold out a few hours after the search giant started to redirect its traffic towards the carrier’s page. On the bright side, this doesn’t seem to be the case for buyers in the UK. Three is expected to receive its initial supply by mid-December along with O2 and TalkTalk. The third network provider recently listed on its website that a white variant is soon to be available. That did turn out to be a mistake from the carrier’s side and it has been rectified.

The Google Nexus 4 will be available for purchase in the UK starting December 13, 2012, through Three retails stores and online. The phone will be up for grabs at £35 a month when choosing The One Plan which comes at a cost of £29. Potential buyers can also opt for a Pay As You Go subscription for £399.99. This option can be coupled with the £15 All in One 15 tariff which provides All-You-Can-Eat data, 300 any-network minutes and 3,000 texts for 30 days, or the £25 All in One 25 that has unlimited internet usage, 500 minutes and 3,000 free messages for a month. 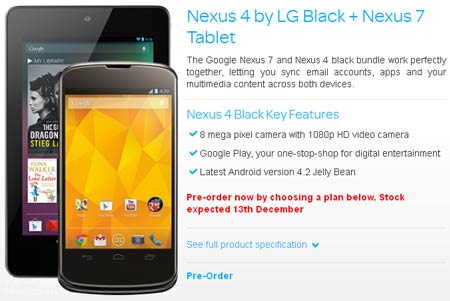