This guy actually made a 3D printed railgun (Video)

A man has built himself a 3D-printed handheld version of a railgun, a weapon only seen so far in video game Quake and in military operations. It’s not just for show either, as the gun is capable of spitting out bullets at a speed of 560mph.

The homemade railgun apparently works just like a full-sized one would, using electromagnetic energy to fire projectiles made out of copper plated aluminum, carbon, teflon, tungsten, and plasma. The firearm makes use of 6 300J, 350V and 5500uF capacitors which weigh 20lbs and are capable of supplying nearly 1800J of energy per shot.

David Wirth, the maker of the railgun, posted images of his creation on Imgur. He was compelled to make a CAD drawing of his idea after his design became increasingly complex. Wirth also supplemented it with an Arduino Uno R3 microcontroller board in order to keep track of various factors such as the charging levels and temperature.

The railgun includes features such as an emergency discharge, power resistor and a button to let go of excess energy after a shot. The firearm uses a pair of outer and inner rails, which were adjusted after Wirth noticed plasma damage on them. During the first test, he noticed the pressure exerted broke a steel bolt in the injector and replaced it with a 3D-printed nylon bold plate.

Wirth has put up videos of the railgun in action. He states that while the bullets used are not lethal, it would definitely hurt. In one recording, an aluminum bullet manages to put a tiny dent in a steel-based wooden board. In another, a carbon projectile seemingly vaporizes even before it reaches its target. 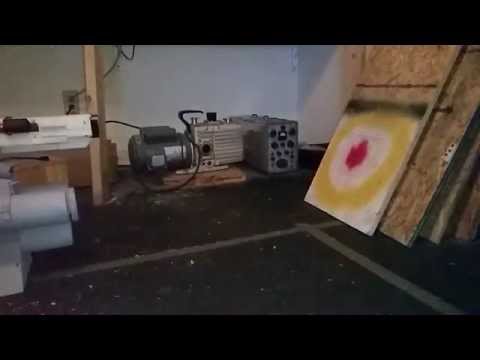