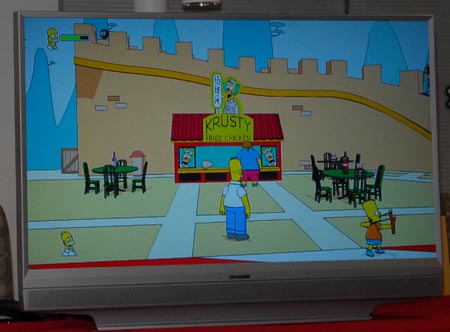 Here’s one good reason for all The Simpsons fans to rejoice. No, we are not referring to The Simpsons movie that is scheduled to release in July 2007. We are talking about the upcoming release of The Simpsons game by Electronic Arts.

Just like Emmy Award-winning television series, ‘The Simpsons’ game too features a hilarious and mind-busting storyline crafted by the show’s writers. Besides, the game is slated to feature the full cast of voice actors from The Simpsons TV show who will reprise their roles for the game as well.

The Simpsons game features the dysfunctional Simpsons family with a twist. Homer, Marge, Bart and Lisa use their new powers to save the world from rising chaos. Your job in The Simpsons game is to help the family by journeying through Springfield as well as vast worlds beyond, and slay villains that come in your path.

The Simpsons game is currently under development by EA’s Redwood Shores Studio, and the game is scheduled for release in fall 2007. The Simpsons Game will release on a number of platforms including the Sony PlayStation3, PlayStation 2, PSP, Xbox 360, Nintendo Wii and Nintendo DS.

According to Scot Amos, Executive Producer of The Simpsons Game project, “Our goal in developing The Simpsons Game is to create the most original game ever, which is a lofty goal and only possible given the close collaboration with ‘The Simpsons’ creative team.”

“We’re also especially proud of the game’s warm visual feel which captures- for the first time ever in a game- the look of the TV show. As the Comic Book Guy says, ‘Best. Simpsons game. Ever,” Amos added.