The Rising Of The Shield Hero Season 2: Release Date, Trailer & Everything Else

After a solid first season and delayed production, fans can’t contain their enthusiasm for The Rising of the Shield Hero season 2. So when is the second season of the epic series releasing? How will the plot for the second season be developed? Let’s find out.

The Rising of the Shield Hero (Tate no Yūsha no Nariagari) is a dark fantasy novel series by Aneko Yusagi. The novel was adapted into an anime series directed by Takao Abo and animated by the studio Kinema Citrus. The Japanese light novel has been illustrated by Seira Minami.

UPDATE: Season 2 of the anime is now streaming. The first episode was released on April 6, 2022.

Story Up To Now (Spoiler-Free)

Naofumi Iwatani is summoned to a parallel world — as the Hero of the Legendary Shield — along with three other men to protect the world from periodic, cataclysmic monster invasion events called the Waves of Catastrophe.

Iwatani as well as Ren Amaki, Itsuki Kawasumi and Motoyasu Kitamura, are tasked with ending the Waves by killing the boss monster. Our enthusiastic protagonist quickly finds out that the the hero who wields the shield is disliked by the dominant religion of the kingdom he is part of due to something that happened in the past. After a false (and very controversial) assault accusation, Naofumi is shunned by everyone and forced to improve his fighting skills by himself. Without any offensive ability and limited knowledge of the new world, he finds himself greatly distressed.

The first season narrates the struggles Naofumi faces and how his relationship with his teammates, Raftalia and Filo, helps him overcome the trauma and hate he has encountered as the Hero of the Shield.

Apart from announcing the launch date, a new trailer was also rolled out officially — you’ll need to turn on captions. Have a look at it and get a free ticket on the hype train. 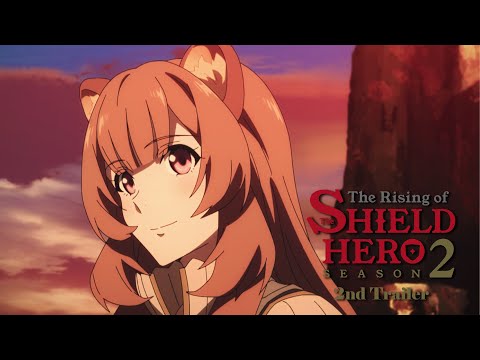 When Will Rising Of The Shield Hero Season 2 Be Released?

The Rising of the Shield Hero season 2 release date has been confirmed via the official channels as April 6, 2022. It will be aired on AT-X, Tokyo MX and other channels in Japan at 10:00 p.m. (9:00 a.m. EDT). Crunchyroll will be simulcasting it about an hour later.

READ: Top 20 Anime Like Overlord That Take You To Another World

The expected premiere of season 2 was originally planned for October 2021. However, the release date was rescheduled due to the then ongoing issues surrounding the pandemic.

What Is The Plot Of Season 2?

The first season of the show ended with a lot of mysteries. What are the Waves exactly? What decision does Fitoria allude to? Why are heroes from the other worlds trying to kill our protagonist? Fans can expect some of these questions to be answered.

Filo and Raphtalia will be facing even stronger enemies, gaining experience and growing in the process. Following the plot of the source material, Naofumi will uncover more details about the relationship between heroes and their purpose, and also fight the gigantic Spirit Tortoise.

We’re not going to give away any major spoilers here. But we definitely hadn’t seen the last of Glass, the Vassal Wielder from another world, in the final episode of last season. We also know that our hero plans to leave the kingdom and travel elsewhere in the new installment. Two new characters, Rishia Ivyred and Kizuna Kazayama, will be joining the main cast this season. More updates can be expected as we get even closer to the release date of the show.

Is The Season 2 Trailer Out?

The first trailer for season 2 was released on September 2020 on YouTube. The trailer was a montage of Naofumi’s adventures and ended with him swearing to protect his friends at all costs.

The trailer was designed not to reveal any plot points or important scenes. Yet the source material made us certain that the second season would involve Naofumi and the heroes from the other world fighting a common enemy. The latest trailer, which was out in February, has been posted above.

Everything Else We Know About Season 2

The Rising of The Shield Hero S2 is being directed by Masato Jinbo, who replaces first season director Takao Abo. The production of the second season will be by Kinema Citrus and DR Movie.

At the Kadokawa Light Novel Expo 2020, it was noted that season 2 release schedule was slated for October 2021. But it was later delayed and rescheduled to be released in April 2022. The music score for the second season is by talented composer Kevin Penkin. Penkin has been involved with major projects like Made in Abyss and Tower of God.

Japanese music band MADKID will perform the opening theme of the series’ second season which is called ‘Bring Back.’ The closing theme titled, ‘Yuzurenai,’ will be performed by Chiai Fujikawa. Kana Hanazawa will be joining the voice cast as Ost Horai.

Will There Be Season 3?

The production of a third season has been confirmed on the official website. The fact that we would be hearing about The Rising of the Shield Hero season 3 installment was also revealed at the 2019 Crunchyroll Expo.

What’s more, it’s been promised that the gap between seasons two and three won’t be as long as the wait between the first and second installments.

Where To Watch Rising Of The Shield Hero?

Outside Japan, The Rising of the Shield Hero can be viewed on Crunchyroll. It’s not clear when and if Netflix will have both seasons to offer in its catalog. Please do check the availability of the show in your geographic location before subscribing to any OTP streaming service.

The very first episode of this anime received negative responses from critics for its handling of false sexual assault accusations. It has also been overlooked by those who are tired of Isekai anime. On the other side, many fans consider it to be an underrated anime with an interesting anti-hero as its central figure.

Though the anime may seem to primarily be about revenge, it is also about redemption and features a cast of varied characters. So if you feel like you’ve been waiting too long for the second season, cheers! It’ll be good to see what Naofumi and his crew have in store for them in the coming season next month.

Chainsaw Man Release Date Set For Fall [What To Expect]

Who Is The Beast Titan In Attack On Titan [Explained]