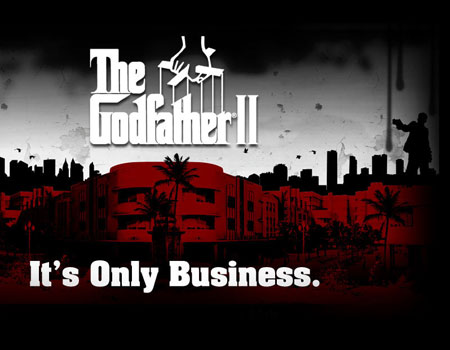 EA recently teamed up with Paramount Digital Entertainment to release The Godfather II videogame. The highly-anticipated title for the Xbox 360, PS3 and PC is now available in North American retail stores. Starting tomorrow, it is expected to begin shipping in Europe.

Gamers can gear up to act like a mobster and think like a don! A sequel to the multi-platinum hit The Godfather The Game, the exciting title is a combination of drama, action and family values that have their roots in the classic Godfather films.

With a perfect 5 out of 5 score from GamePro magazine, The Godfather II videogame offers players an interactive gaming experience. Players will need to get right into the action as they build and invest in their family, manage their rackets and takeover crime rings and corrupt officials.

“The Godfather II offers players the ultimate fantasy of being a Don – of finally being the guy who calls all the shots for the family,” mentions Executive Producer Hunter Smith. “By combining the strategic gameplay of thinking like a Don through the ‘Don’s View’, with our intense, visceral ‘Blackhand’ combat, we are focusing on the game at the root of the Godfather franchise, the game of organized crime. In essence, we’re creating a new niche in the open-world genre and are really excited to see how players will build their families and customize their own experience in both the single player campaign and multiplayer battles.”

As the revolutionary Don, gamers are offered a distinct feature called as Don’s View. The attribute is actually a 3D display of the player’s criminal empire and family tree. The feature provides a birds-eye view of all 3 cities in the empire. Gamers can take complete advantage of this feature to enjoy enhanced co-ordination of their take-down strategies while conspiring on enemies. The feature also allows player to attack enemy compounds.

Players can take control of the Corleone family as the Don while making it possible to survive in the Godfather universe. With an opportunity to create their own story of deception, betrayal and conquest, players are set up in the 1960’s organized crime world.